Designed by Signify as part of the Philip Hue line of lights and accessories, the Hue Play HDMI Sync Box is designed to let Hue users sync their lights to their home entertainment systems. 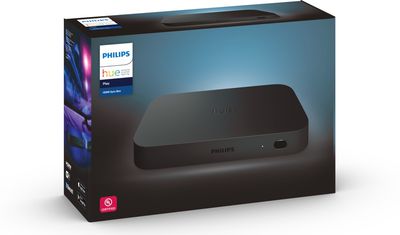 One of the major complaints about the Hue Play HDMI Sync Box when it launched in September was its lack of support for Dolby Vision and HDR10+. With the Sync Box, Hue users were able to watch HDR10+ and Dolby Vision content thanks to passthrough support, but there was no way for it to detect content to create lighting effects.

That's changed in the new update, and with compatible televisions, the Hue Play HDMI Sync Box now works with both HDR10+ and Dolby Vision.

For those who prefer to use infrared TV remote controls or the Harmony universal remote, the Hue Play HDMI Sync Box can now be configured to work with these devices. It can be set to respond to any button on the remote using the Hue Sync mobile app.

The Hue Play HDMI Sync Box can be purchased from the Philips Hue website for $230.

I‘ll never understand why so many people don‘t hesitate to place an internet connected microphone into their private rooms. That‘s risky on so many levels.

Do you have an iphone in your house?
Score: 15 Votes (Like | Disagree)

DeepIn2U
I have no idea what this device does??
Score: 7 Votes (Like | Disagree)

beanbaguk
I would genuinely love to have one. Just not at this price. Perhaps I'm being a little obtuse, but to me this is massively overpriced and should retail for half this cost. I've experimented in the past with a Raspberry Pi which cost just £50, but it's messy and removed it, and now it runs as a home automation server.

I have no idea what this device does??

It synchronises hue smart lights with the picture on your TV. So the colour of the lights matches what is on the screen. I might have to get one if this update works as advertised.
Score: 6 Votes (Like | Disagree)

Woyzeck
I‘ll never understand why so many people don‘t hesitate to place an internet connected microphone into their private rooms. That‘s risky on so many levels.
Score: 5 Votes (Like | Disagree)

I bought it a month after and came out and I used it for about 2 weeks. The hue sync suddenly loses signal maybe every 20mins and it takes about 5-10 secs to come back up, so if playing Xbox or watching a movie you’ll have to wait. So for now it’s an expensive paper weight.
Score: 4 Votes (Like | Disagree)
Read All Comments