Apple last week announced new 11 and 12.9-inch iPad Pro models, and as of today, the new iPads are arriving to customers. We picked up one of the new 12.9-inch models and checked it out to see just what's new and whether it's worth buying.

Subscribe to the MacRumors YouTube channel for more videos.
When it comes to design, the new ‌iPad Pro‌ models are identical to the 2018 ‌iPad Pro‌ models, but with one important distinction -- a new square-shaped camera bump that accommodates a new camera setup. 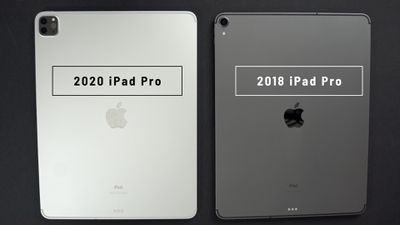 Along with the two cameras, there's a new LiDAR Scanner, which is meant to add some pretty nifty new AR capabilities. The LiDAR Scanner uses reflected light to measure the distance from the sensor to surrounding objects up to five meters away, indoors and outdoors. It can basically create a more complete and detailed understanding of a scene and what's around you, which is useful for AR.

There are some improvements you'll see immediately in AR apps like people occlusion and better motion capture, but right now, there aren't a lot of AR apps that can take full advantage of the LiDAR Scanner. We'll have to wait to get a more complete picture of what it does, and we can also expect this same technology in next-generation iPhones.

The cameras look great, and are basically equivalent to what you're going to get with the ‌iPhone‌, but improved camera capabilities may not be what most people are looking for in an iPad as it's not the easiest device to capture images and video with.

Though there are two cameras, there's still no rear portrait mode, which is something to be aware of. The front-facing TrueDepth camera system hasn't changed and it's still 7-megapixels.

Along with the new square-shaped camera bump, the ‌iPad Pro‌ comes with an upgraded A12Z Bionic chip. It's an improvement over the A12X in the previous-generation ‌iPad Pro‌, but only when it comes to GPU performance. CPU performance is just about the same based on Geekbench tests, though there's an 8-core GPU instead of a 7-core GPU, so there are some modest performance gains.

The processor in the 2018 ‌iPad Pro‌ was powerful enough for gaming, 3D rendering, video editing, and other intensive tasks, and the 2020 ‌iPad Pro‌ is just as capable, though not really more capable. Base RAM in the new ‌iPad Pro‌ has been bumped up, though, and all models now ship with 6GB RAM. In 2018, only the ‌iPad Pro‌ models with 1TB of storage had 6GB RAM, while others had 4GB.

Apple's 2020 ‌iPad Pro‌ models also have more LTE bands, which is great if you're traveling, and they're WiFi 6 compatible, ideal for future proofing. WiFi 6 isn't widely used yet, but it may be much more widespread in a few years.

In May, Apple will release the new Magic Keyboard that's compatible with 2018 and 2020 ‌iPad Pro‌ models, bringing trackpad functionality. Trackpad and mouse support on the ‌iPad Pro‌ is great so far in our testing, but it's not an ‌iPad Pro‌ specific feature and so isn't a key reason to purchase one of the upgraded tablets.

Given the minor upgrades in the 2020 ‌iPad Pro‌ models, it's not worth picking up one tablets if you've already got a 2018 ‌iPad Pro‌. Sure, there's a better AR experience, but as of right now, with no AR apps taking advantage of it, it's not a major selling point.

If you have an older ‌iPad‌ model and are thinking of upgrading to an ‌iPad Pro‌, the 11 and 12.9-inch 2020 ‌iPad Pro‌ models are an excellent choice and are more than powerful enough to replace a computer. And with the upcoming Magic Keyboard and the built-in trackpad support, they're also much more capable of serving as a Mac replacement.

What do you think of the new 2020 ‌iPad Pro‌? Let us know in the comments.

Falhófnir
Continuing complaints about this being a non-upgrade with the CPU, but I think that's the wrong way to think about this. If mini LED isn't ready until late this year they had 2 options, one they just wait, and people complain they need a new iPad now, but don't want one that's approaching 2 years old, or two they do this refresh, giving people who need an iPad now quite a few new features and enhancements before the new model debuts at the end of this year (high end 12.9") and/ or rolls out fully this time next year. It's a solid release. More graphics power, 6GB RAM, already plentiful CPU power, base storage bump, LiDAR and wide angle camera systems and stereo sound recording. If you were happy to buy the 2018s a few months ago, no reason you shouldn't be even more happy to buy these now?
Score: 17 Votes (Like | Disagree)

CWallace
Jason Snell noted one of the more likely reasons to launch a refreshed iPad Pro now and a more significant update later this year is for the AR capability so that Apple can talk about AR during WWDC and developers can start working with it now without having to wait for the iPhone 12 Pro (and which may be delayed past late September).

The A12X was already a beast of a CPU, so the immediate need for "more powah!" (to quote Jeremy Clarkson) is not really necessary. Jason Snell also thinks that Apple might use the iPad Pro as the platform to test "macOS ARM Edition" which could explain the boost in memory from 4GB to 6GB (or perhaps the AR sensor needs more RAM to work with).

Macrumors you didn’t mention the screen once. Don’t you think the most visible feature should be touched upon? Is there any difference to the 2018?

Per 9to5Mac, the displays are identical to the 2018 models. Have to wait till this Fall for an upgraded display (assuming the miniLED rumors are true).
Score: 11 Votes (Like | Disagree)

jase1125
Personally, I have not found a compelling reason to upgrade from my 10.5” iPad Pro. I was thinking I would upgrade this year, but with the minor graphics performance bump I will just continue on with my 10.5. Quite surprised they didn’t do essentially anything with the CPU.
Score: 10 Votes (Like | Disagree)

The MacBook Air and the iPad are nothing alike. No idea why people say “well for this price I’d rather buy a laptop that has no touch screen, pencil support or iOS”. Well ok. Different products.

for a lot of us: price doesn’t matter. iPad is what we want. We aren’t just getting it because it’s supposedly cheaper than a MacBook. We want it
Score: 10 Votes (Like | Disagree)

calzon65
Sure there are some additions/improvements compared to the 2018 model, but from 2018 vs 2020 benchmarks in a previous MacRumors story, the performance increase is insignificant. After two years, there should have been a greater performance increase.
Score: 9 Votes (Like | Disagree)

stownsend3
Waiting until WWDC to hear if there is any news on Xcode for iPad or not. Would love to retire my 2013 MBP and 10.5 iPad Pro and move to just the 12.9in + new Magic Keyboard.
Score: 8 Votes (Like | Disagree)
Read All Comments