Apple today informed developers that ARKit 3.5 is now available, with the update adding support for the LiDAR Scanner and depth-sensing system included in the new 11 and 12.9-inch iPad Pro models. 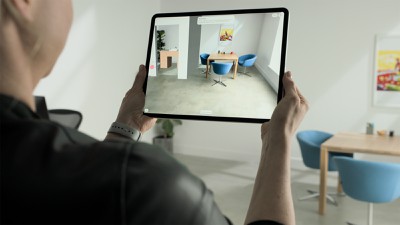 According to Apple, the new LiDAR Scanner will allow for a "new generation of AR apps" that use Scene Geometry for enhanced scene understanding and object occlusion.

The LiDAR Scanner uses reflected light to measure the distance from the sensor to surrounding objects up to five meters away, indoors and outdoors. Depth frameworks in iPadOS combine depth points measured by the LiDAR Scanner, data from the two cameras, and data from motion sensors with computer vision algorithms handled by the A12Z Bionic to create a detailed and complete understanding of a scene.

At the current time, the new LiDAR Scanner with its enhanced augmented reality capabilities is limited to the new ‌iPad Pro‌ models, but Apple is also expected to include the feature in the 2020 iPhone models set to be released this fall.

I take Gimmicks the world doesn't need for $100, Alex

Always fun when people pass judgment based on their own internal subjective beliefs. But at least you didn't say that you polled all 8 of your friends and none were interested in it.
Score: 8 Votes (Like | Disagree)

Thomas, post: 28306089, member: 1021539"]
But I guess the LiDAR should still help in normal AR applications as well, e.g. when it comes to detecting a surface. Currently this is done using the cameras and AI only. So, the LiDAR should be able to transparently assist that AI in current AR applications as well, or?
The question there would be: will it remove lag in AR applications? Last time I tried an AR app the stabilization of AR objects was imho too slow. For objects in space it doesn't really matter, but for objects supposed to be attached to or sitting on a surface it didn't really met my expectations...

Yes. The calibration step goes away.

Instant AR
The LiDAR Scanner on iPad Pro enables incredibly quick plane detection, allowing for the instant placement of AR objects in the real world without scanning. Instant AR placement is automatically enabled on iPad Pro for all apps built with ARKit, without any code changes.

Defender2010
This is all in preparation for their glasses. To gather real life data. iPhone next when devs have caught up.
Score: 3 Votes (Like | Disagree)

I take Gimmicks the world doesn't need for $100, Alex

farewelwilliams
people that say "but the 12Z chip is awful!" have no clue what it means to include an expensive lidar feature.
Score: 2 Votes (Like | Disagree)
Read All Comments