In an internal document distributed to Apple Authorized Service Providers this week, obtained by MacRumors, Apple has acknowledged that some iOS 13 or iPadOS 13 users may experience issues with Personal Hotspot. 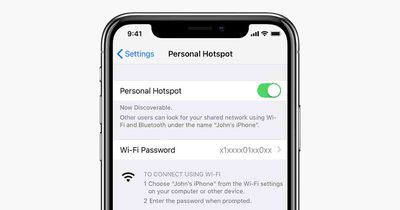 Apple has told Authorized Service Providers to expect customers who are unable to connect to a Personal Hotspot or experience frequent disconnection from one. Customers may also experience general issues with data performance.

Some users have been reporting problems with Personal Hotspot as far back as iOS 13.1.2.

As a temporary workaround, service providers have been instructed to toggle Personal Hotspot off, and then back on. This suggests that there is likely to be a fix in a future software update, but it is unclear if the issue has been resolved in iOS 13.4, and the latest GM release notes do not mention any Personal Hotspot fixes.

Apple recommends that customers keep their software up to date and said that this is not a hardware issue.

Quu
I've had to use this a lot recently and it is quite buggy. I've had to turn it off and on many times to get it to show up in my Windows computers list of available WiFi networks and often you can stay connected for a few hours then it just stops working. You're still connected to the phone but no data is moving requiring you to turn the hotspot off and on again.

Quite annoying when you're in the middle of a conference call on your computer or something like that and you disconnect for 30 seconds.

I mean I know this is a mild inconvenience but when you label a phone as Pro and charge over a thousand dollars for it I expect it to just work properly for those of us trying to get work done.
Score: 8 Votes (Like | Disagree)

insomniac86
Last week I sat with 160 odd staff and showed them how to hotspot to their work supplied iPhone to test VPN and remote access for working from home due to the pandemic.

iPhone 8 Plus and 11’s are the models we provide to staff.

The personal hotspot failed to function reliably on about 1/3 of the iPhone.

mi7chy
That's how Apple achieves better battery life at the expense of throttling everything from turning off hotspot, display dimming under use, lower GPS update frequency causing inaccuracies, etc.
Score: 5 Votes (Like | Disagree)

chucker23n1
Personally, I'd say it's mostly fine. It does disconnect now and then.

But… the feature is inherently complex (you need two devices, one of them needs to create a Wi-Fi hotspot, etc.). And you know they could have reduced the need for this? By making cellular an option on the new MacBook Air this week.

Instead, they made an ad for the iPad Pro that pokes fun at Mac and Windows laptops typically not having cellular. Ouch?

Ever since Craig Federighi was put in charge of iOS & MacOSX the stability & quality of both have plummeted. There's always a .1 release near immediate after a .0 release that tries to fix bugs in .0 but always adds more. There's persistent crashes, security issues. The list goes on. Scott Forstall needs to be brought back to fix them both.

I don't understand this deification of Scott Forstall. I see little evidence that his org shipped inherently higher-quality code than Craig's.

Now, if we go further back to Bertrand Serlet, maybe? But at the time, Apple had a lot less code in total, so it was also easier to manage.
Score: 4 Votes (Like | Disagree)

now i see it
I've got an old iPhone on iOS 9 and will never "upgrade" it because it's a flawless personal hotspot device. Works perfectly. So much for progress.
Score: 3 Votes (Like | Disagree)
Read All Comments