The European Union has called on Netflix, YouTube and other streaming services to consider temporarily reducing streaming quality in a bid to ease the strain on the continent's broadband networks, as tens of millions of people start working from home amid the coronavirus pandemic (via Financial Times). 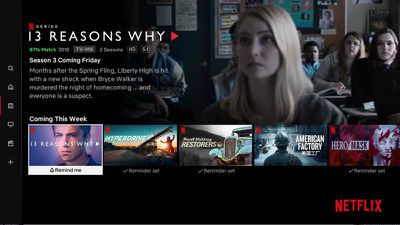 The EU said streaming platforms should consider offering only standard definition programming rather than high-definition, while individual users should pay attention to their data consumption.

Thierry Breton, a European commissioner in charge of digital policy, said streaming platforms and telecoms companies had a "joint responsibility to take steps to ensure the smooth functioning of the internet."

Responding to the call, a Netflix spokesperson acknowledged the potential issue, but pointed to the existing tools it already provides to ISPs that allow them to store its library closer to customers, thereby easing some of the burden on the internet's backbone.

"Commissioner Breton is right to highlight the importance of ensuring that the internet continues to run smoothly during this critical time," the company spokesperson said. "We've been focused on network efficiency for many years, including providing our open connect service for free to telecommunications companies."

Netflix's "adaptive streaming" technology also adjusted the resolution of a video according to available bandwidth in the home or local area, they added.

According to FT, there are growing worries that domestic broadband connections, which were designed to cope only with evening surges in traffic, may not be able to handle long days of adults engaging in video conferencing and children taking online classes or logging on to play games or watch movies.

EU net neutrality laws prohibit the throttling of entertainment services, but several telecoms executives from across the continent have suggested a co-operative plan to safeguard the system was possible.

Italy, one of the countries worst hit by the pandemic, has seen a threefold increase in video teleconferencing, but this has had to compete with streaming and gaming – a combination that resulted in a 75 percent rise in home broadband traffic and mobile networks over the weekend.

Meanwhile, the Spanish telecoms industry has issued a warning urging consumers to ration their internet usage by streaming and downloading more in off-peak hours. It also asked people to consider using landlines for voice calls.

On Tuesday, U.K. mobile networks suffered severe outages after the number of voice calls rose by 30 per cent and overloaded the system, leaving hundreds of thousands of customers unable to connect calls to people on other mobile networks.

Moakesy
I just love the idea of non-IT literate people googling how they can hoard broadband and store it next to all their toilet rolls !!! :);)
Score: 17 Votes (Like | Disagree)

This entirely misses the point that networks are designed for these existing evening peaks and normal daytime traffic is well below this peak.

At least in the UK we should have no issue with daytime traffic.

There is difference between bandwidth and latency. Remote desktop and videoconf are med BW, but need low latency. Whereas streaming is high BW, but accepts high latency.
This is actually an interesting case against net neutrality
Score: 14 Votes (Like | Disagree)

maninhat
In Switzerland the network providers are struggling with so many people working from home, so makes sense in my opinion.
Score: 13 Votes (Like | Disagree)

If networks are struggling to keep up with home working then this is a reasonable request. So what if streaming quality is slightly reduced?

Agree. Sadly, there's still a lot of people who are focused on and only think about me, me, me, me and me.
Score: 12 Votes (Like | Disagree)

M.PaulCezanne
This is a common sense, proactive solution.

The sky is falling. People are dying. We need such solutions - not more of the complacent, irresponsible skepticism the White House has shown, particularly since nothing’s at stake but your ability to be entertained.

Think I’m panicking? Don’t take my word for it - take it from an NYC ER doctor: https://www.nytimes.com/2020/03/19/opinion/coronavirus-doctor-new-york.html
Score: 10 Votes (Like | Disagree)

EU net neutrality laws prohibit the throttling of entertainment services, but several telecoms executives from across the continent have suggested a co-operative plan to safeguard the system was possible.

This statement in the article is incorrect. Internet providers in the EU have been doing QoS throttling for ages, just like everywhere else. What they would not be allowed to do is to selectively throttle for instance Netflix streaming but not Amazon Video streaming.
Score: 8 Votes (Like | Disagree)
Read All Comments