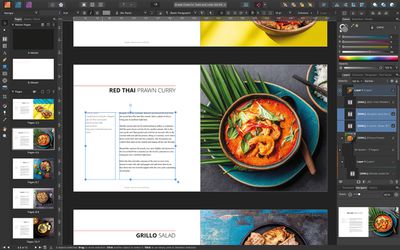 The biggest news relates to Publisher, with its first big update since launching in the summer. Version 1.8 of the Mac app brings IDML compatibility, allowing users to import InDesign files for the first time.

The IDML import capability should appeal to businesses and other professional users who want to access older document catalogs, and should make it easier for those who want to make the switch to the Affinity suite.

In addition, Publisher now offers the ability to save documents as templates for re-use in future projects, as well as the ability to combine multiple Affinity Publisher documents together into a single file, with smart merge of master pages, text styles, table of contents and indexes.

Elsewhere, there's added support for Excel file import to bring in spreadsheet tables and data, PDF export that's up to five times faster than before, and several other improvements and fixes.

Affinity Photo and Designer are also getting v1.8 updates today. Some of the new features include: Smart object support when importing PSD files; a new stock imagery search panel in Designer; customizable keyboard shortcuts in both apps; and Nik plug-in compatibility for Affinity Photo.

Affinity v1.8 apps are available to purchase from the Serif website for a one-off payment with no subscription. Affinity Publisher, Photo, and Designer cost $49.99 on Mac, while Affinity Photo and Designer for iPad cost $19.99. Existing users can download the updates free.

Importing my InDesign work has been the number one reason I still have not used Publisher. I just converted several of my recent layouts to the IDML format, and opened them in Publisher. They worked great, but many of the font sizes had to be reduced to get them to fit properly.

Does anyone know of an easy automation to converting CS6 or newer INDD files to IDML without having to open each file and individually save each? Any if you do, can you give some details :)

Now that I can import, I need to learn the differences between InDesign and Publisher. If anyone has a good reference or Youtube video, please recommend it :)

I've been using the Adobe Suite forever now, and on my personal systems, am still on CS6 - I don't want to pay monthly for that. SO I have been stuck with Mojave due to that 32 bit restriction, since I need to use Adobe Photoshop, Illustrator and InDesign. Now, once I get a good grasp and feel confident in the Serif Suite, I will upgrade and say goodbye to Adobe.

I did try to install and run CS6 in Parallels in Mojave - but Illustrator and InDesign always crash on load - Parallels support could not figure it out. Only Photoshop worked this way.

we’ve been using Publisher for over a year now. We started during the public beta and after a few weeks moved wholesale from InDesign.

I’m now at the point where I genuinely prefer publisher. Getting table of contents working correctly requires something close to a PhD but apart from that, it’s all been pretty straightforward.

There are some really dramatic benefits to Publisher over indesign. The always on wysiwyg display is a bit of a game changer.

My number one complaint? That it’s not possible to disable embedding of documents instead of linking them. You can set it as a preference, but embedding is still there and possible.

There are situations where I can see embedding could be desirable, ie, archiving or for remote working, but in normal day-to-day use as a professional organisation, you should have absolute confidence about how files are working.
Score: 3 Votes (Like | Disagree)

gnipgnop
Similar to when InDesign originally came out and supported QuarkXPress file conversion, you can't really expect the converted files to be exact. You typically have to do some tweaking and adjustments, but it's easier than having to try and rebuild layouts from scratch.
Score: 2 Votes (Like | Disagree)

Gorms
Whoa, whoa, whoa. Smart Object support for PSD’s in Affinity Photo? That’s big news and also incredibly useful to me at this moment in time. I didn’t think they were gonna be able to do smart objects in AP as it was some Adobe proprietary thing, looks like I was wrong. Thanks and nice work Serif!
Score: 2 Votes (Like | Disagree)

Does anyone know of an easy automation to converting CS6 or newer INDD files to IDML without having to open each file and individually save each? Any if you do, can you give some details :)

Have you tried this script ('https://redokun.com/resources/batch-convert-idml-file')?

dmylrea
I cannot wait for the day when the Affinity Suite (including a PDF app with Acrobat Pro capabilites) is here and knocks some sense into Adobe. PDF has been around for over 20 years and an open standard for more than 10, yet Adobe feels their app is so special they charge $300-$450 for the app (or $20/mo, forever).

Affinity...give us an alternative to Acrobat!
Score: 2 Votes (Like | Disagree)
Read All Comments