The United States Federal Trade Commission today announced that it is sending out refund checks totaling over $1.7 million to people who fell victim to tech support scams. 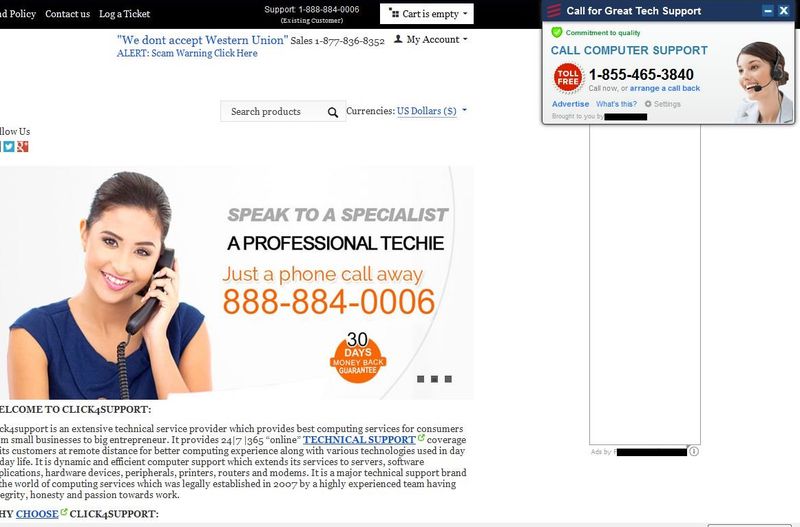 Click4Support representatives would convince people into providing them with remote access to their computers for identifying non-existent viruses and malware. The fake services were sold both on a one time fee basis or with a long-term service plan, with the fake company charging from $69 to thousands of dollars.

The FTC shut down Click4Support and other similar companies back in 2015 and filed legal action at that time, with refunds finally available for customer who were tricked into shelling out money.

The FTC is providing refunds averaging approximately $30 each to victims, and most recipients will receive their refunds through PayPal, though some will receive checks. The money is sourced from Click4Support after a federal court in 2018 ruled that its assets should be used to reimburse customers who lost money due to the scams.

While this is a small victory for some users who have been tricked by scammers, scams have unfortunately grown much more sophisticated over the course of the last five years.

Apple maintains a dedicated support page that instructs customers on how to avoid phishing emails, fake virus alerts, fake phone calls, and other similar scams. These tips are well worth reading for anyone who owns an Apple device.

Where is the money coming from? Tax dollars or is money recovered from the scammers?

Looked it up. From an earlier announcement: "At the request of the Federal Trade Commission, a federal court ordered that the assets of the operators of an alleged tech support scam be used to reimburse consumers who lost money to the defendants’ scheme."

I'll add this information to the article.
Score: 15 Votes (Like | Disagree)

Am I a jerk for being of the mindset that if you're... let's say ignorant... enough to fall for these scams then you kind of deserve it and shouldn't be reimbursed?

Most of the victims are old people with no understanding of computers and many have undiagonized Alzheimer's. They are/were pretty smart when it comes to various other aspects of life. Some of them were scammed out of their life's savings. There have been incidents of suicide due to scams. Is this how you want to treat the elderly who worked to build this country, who fought wars to protect you, who laid the roads you drive your car in?
Score: 11 Votes (Like | Disagree)

P.S. Anybody know how I can get that "macrumors newbie" notation removed or changed in my profile box?

P.S. Anybody know how I can get that "macrumors newbie" notation removed or changed in my profile box?

Attirex
Unfortunately, my mother-in-law fell for one these scams. She's not stupid, but in her eighties and very far from being tech savvy. As a result, she's an easy target. I suspect many victims are elderly.
Score: 6 Votes (Like | Disagree)
Read All Comments

Monday April 6, 2020 2:56 am PDT by Tim Hardwick
Apple will announce a new 13-inch MacBook Pro in May with the codename J223, according to a rumor shared by YouTuber and leaker Jon Prosser. Note: it’s a refresh to the current 13” So the bigger 14” display upgrade is a big possibility— Jon Prosser (@jon_prosser) April 4, 2020 Analyst Ming-Chi Kuo has said Apple plans to release new MacBook Pro and MacBook Air models with scissor keyboards ...
Read Full Article • 126 comments

Saturday April 4, 2020 3:30 pm PDT by Frank McShan
iOS 14 could offer home screen widgets and wallpaper customizations for the first time, according to 9to5Mac and Twitter user DongleBookPro. Apple is reportedly working to implement widgets that can be moved freely around like icons on the iPhone and iPad homescreen for the very first time. The feature is reportedly codenamed "Avocado" and no other details are available. It was also...
Read Full Article • 270 comments

Saturday April 4, 2020 6:00 am PDT by MacRumors Staff
With the calendar rolling over to April this week, we yet again saw several leaks and rumors, most notably including Apple itself leaking some references to a pair of long-rumored products: a new budget iPhone SE and AirTags item trackers. Subscribe to the MacRumors YouTube channel for more videos. Apple also acquired popular weather app Dark Sky, while Amazon's Prime Video app now allows...
Read Full Article • 35 comments

Monday April 6, 2020 4:38 am PDT by Tim Hardwick
Further references to Apple's upcoming low-cost iPhone have appeared online, one on a Chinese e-commerce website and another on Verizon's smartphone trade-in page. Spotted by tech blog MySmartPrice, Chinese retailer JD.com has published a placeholder for Apple's so-called "iPhone 9" that includes a teaser image of a veiled smartphone, but other than that it lacks any particularly revealing...
Read Full Article • 82 comments

Friday April 3, 2020 11:14 am PDT by Juli Clover
Apple is offering employees significant discounts on products that include the HomePod and Beats headphones, according to details on the deals shared by MacGeneration and 9to5Mac. Apple is said to be clearing stock of Beats headphones and HomePods, providing them to employees through an internal deals program. The HomePod is available at a 50 percent discount, dropping the price to $149.50,...
Read Full Article • 106 comments

Thursday April 2, 2020 4:06 pm PDT by Juli Clover
Apple's new low-cost iPhone is set to launch as early as Friday, April 3, according to a new report from 9to5Mac that cites a tip from a "highly trusted reader." The site says that while it can't be certain about the launch date, "Apple could reveal and begin taking orders for the new iPhone as soon as tomorrow." The iPhone 8 Apple is said to be planning to call the new iPhone, which is...
Read Full Article • 374 comments