The popular endless runner game for iOS, Alto's Odyssey, is now available on macOS computers via the Mac App Store. 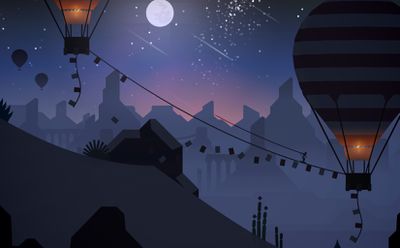 Originally set to debut in summer 2017, Alto's Odyssey is the followup to the original 2015 game Alto's Adventure and while it's a standalone game, it retains the endless runner mechanic that the original was known for while introducing new features, controls, and a new desert location. Both games feature a "one-touch trick system" that players use to control the main character to chain together combos and complete various goals.

Join Alto and his friends and set off on an endless sandboarding journey to discover its secrets.

Along the way, you’ll grind across vines, bounce atop hot air balloons, ride towering rock walls, and escape mischievous lemurs – all while uncovering the desert’s many mysteries.

In addition to the game's release on Mac, a simultaneous update has been pushed out to the game on iOS, tvOS, and iPadOS, so that any progress in the game on those platforms will sync with the Mac installation, allowing users to switch between devices and continue where they left off seamlessly.

The release of Alto's Odyssey on Mac mirrors the staggered release of the original Alto's Adventure across Apple platforms, with a Mac launch following mobile versions of the game.

peglegjack
This game is crackrock until you get to the really high levels where you have to play through all the settings in order to even have the chance to accomplish one of the objectives, at which point you realize you've had enough.

I didn't finish either of these games, but definitely got close
Score: 1 Votes (Like | Disagree)
Read All Comments