Samsung today announced a new slate of 2020 smartphones, debuting a range of devices that include the S20 5G, the S20+ 5G, the S20 Ultra 5G, and the most novel, the foldable Galaxy Z Flip.

MacRumors videographer Dan was in attendance at Samsung's Unpacked event in San Francisco, and he was able to spend some hands-on time with the new smartphones. Watch the video below for some close-up details and opinions on Samsung's new lineup, which competes both with Apple's current lineup and its upcoming 2020 smartphones, which we expect to see in September.

Subscribe to the MacRumors YouTube channel for more videos.
Samsung's Galaxy Z Flip is its second foldable device, but the first that's designed with a smartphone form factor. The device starts out as a 6.7-inch smartphone, but folds in half to make it more pocketable. 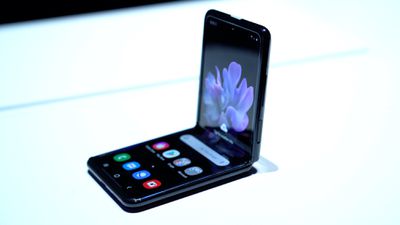 The Z Flip is Samsung's first foldable smartphone that uses a glass display, with Samsung adopting new ultra thin foldable glass technology. Using glass rather than a laminate material results in a nicer display and a device that overall, feels more premium.

The hinge feels sturdier than the hinge in the Galaxy Fold, and it's a neat design because it can be set to multiple different angles and used in what's called "Flex Mode" while half folded. In this mode, the bottom half props up the top half for a hands-free mode that can be used for selfies and unique photography opportunities.

Because of the hinge design and the way that it's meant to be used at multiple angles, the Z Flip doesn't open as easily as traditional flip phones, which is a net positive. It has a solid build and doesn't feel as fragile as the Galaxy Fold.

Samsung is charging a whopping $1,380 for the Galaxy Z Flip, which is sensationally expensive for what's essentially a gimmick, but it is a high-quality, solid design that demonstrates what's possible with foldable display technology.

Samsung's smartphones range in size from 6.2 to 6.9 inches, and on the higher end, 6.9-inches is massive, especially for a device that has a bezel-free design with just a single pinhole camera cutout at the top. All of the phones offer HDR10+ support along with 120Hz refresh rates, but using the 120Hz refresh rate requires bumping the resolution down to 1080p.

The cameras are designed to take improved images in low lighting conditions, and Samsung showed off an impressive 10x lossless zoom feature that offers a total of 100x zoom on the S20 Ultra.

When it comes to batteries, these smartphones have 4,000 to 5,000mAh capacities, which beats out anything the iPhone has to offer at the current time. Samsung's devices are definitely premium and are bringing Samsung's best tech to lure smartphone users away from the ‌iPhone‌, but they also have premium prices.

We're going to have more in-depth coverage of the Galaxy Z Flip and Samsung's new S20 smartphones coming in the near future, so expect to see some detailed comparisons with Apple's smartphones starting later this week.

sirozha
I haven't read any comments yet, but I think I can summarize them:
1. Samsung sucks.
2. Android sucks.
3. These phones are ridiculous.
4. No one needs a folding phone.
5. The screen will break quickly on the folding phone.
6. Samsung copied Apple again.
7. Even if these phones are great, they still run Android, which sucks.
8. This is a solution in search of a problem.

Can someone explain the use case? What is the purpose of a phone that folds in half to half the height but double the width and which needs to be opened to be used?

I guess you are too young to remember the Razr. You probably weren't born yet when it was the most popular phone.
Score: 36 Votes (Like | Disagree)

What are you talking about? Apple devices have outperformed competitors for years with “lesser hardware.”

Nice try, that argument doesn't pass the sniff test with me anymore. I believed it for years, until I decided to try Android on some old used S7 Edge for S&G. To my surprise, it was awesome. Now I'm on an Note 10+, and nothing comes closer to being a complete package than this beast of a device. I even paid $200 less than what a 11 Pro Max would have cost me. The way I look at it, iPhones should cost about $300-400 less than Galaxy flagships, for offering so much less hardware. Not even close. Apple's days of being The Premium device in the industry, are long over.
Score: 18 Votes (Like | Disagree)

NIKKG
Nice but the price is too high, lets not give Apple any ideas!
Score: 17 Votes (Like | Disagree)

Zito Abroad
So glad I haven't allowed myself to be locked into an ecosystem, or at least allowed myself to think I'm locked in, to an ecosystem. The hardware in the S20s and Galazy Z Flip is absolutely industry leading and just too good to pass over. Can't imagine paying anywhere over $1000 for devices that have so much less hardware (storage, RAM, etc...)
Score: 17 Votes (Like | Disagree)

Aston441
If that really is glass, made from Silicon Dioxide, that folds, like paper...


That's a game changer. The mind reels at possibilities that havent even been conceived of yet.
Score: 15 Votes (Like | Disagree)