At the time of writing, the refurbished models are available in Space Gray, Silver, or Gold with 64GB, 256GB, or 512GB of storage through Apple's online store in the United States. All of the models are unlocked, aka SIM-free. 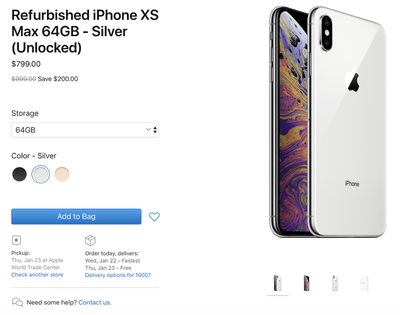 Apple says all refurbished iPhone models are thoroughly inspected, tested, cleaned, and repackaged with a new white box and all manuals and accessories. Apple also installs a new battery and replaces the outer shell, making it nearly impossible to distinguish between a refurbished and brand new iPhone.

Any refurbished iPhone model comes with Apple's standard one-year warranty effective on the date the device is delivered, which can be extended with AppleCare+ at a cost of $199 for the iPhone XS and iPhone XS Max.

Apple is not offering refurbished iPhone XR models at this time.

Gee...compared to iPhone 11 pricing why would anyone buy one of those?

pike908
Gee...compared to iPhone 11 pricing why would anyone buy one of those?
Score: 10 Votes (Like | Disagree)

Still speeding along on my 6s.

Still kinda-speeding along on my iPhone SE.
Score: 6 Votes (Like | Disagree)

Still speeding along on my XR.

Still speeding along on my 6s.
Score: 5 Votes (Like | Disagree)

MattMJB0188
We need these specs put in the iPhone 8 form factor. No notch, no ugly camera, and a home button. Win win.
Score: 5 Votes (Like | Disagree)
Read All Comments