Two new support videos shared this morning walk ‌Mac Pro‌ owners through RAM upgrades and graphics upgrades through adding a new MPX Module. Apple designed the ‌Mac Pro‌ to be upgradeable over time, so all of the components can be swapped out. 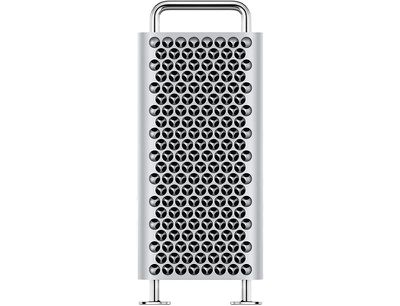 Upgrading the ‌Mac Pro‌'s RAM can be done by lifting off the aluminum housing, opening up the DIMM cover, opening the DIMM ejectors, pulling out old RAM, and then aligning the DIMMs of the new memory into the optimal slots and pushing it in gently.


Installing a new MPX Module requires lifting off the aluminum housing, loosening the screws of the MPX base with a screwdriver and removing the clamp plates, unlocking the MPX base, and then sliding in a new module.
Apple also has a support document highlighting all of the parts that can be replaced and upgraded in the ‌Mac Pro‌, including the memory, PCIe cards, Apple I/O card, power supply, SSD, and wheels.

Many other ‌Mac Pro‌ support documents are available to walk users through component replacement and other features, with a list below:

Apple warns that damage caused by failing to follow the specific instructions provided on replacing components in the ‌Mac Pro‌ is not covered by Apple's warranty.

There are also some support documents specific to the new Pro Display XDR.

I am waiting for the video: How to Buy a House With $65k Instead of a Worthless Depreciating Asset.

What part of this do you not get? Your post is probably the most uninformed I’ve yet seen on this subject.
Score: 19 Votes (Like | Disagree)

gugy
I love this computer. I want one so bad but I think the MBP 16" will fit the bill better for myself.
If I had the means and the high paying clients, I would definitely get one now, still over time this will be a good deal. My MP 5,1 still a solid machine.
Score: 13 Votes (Like | Disagree)

now i see it
I missed the support document that explains how are we going to pay for this
Score: 12 Votes (Like | Disagree)

A 'pro' user doesn't and shouldn't need to call support to install a SSD...

EXACTLY --wrong. This statement is so incorrect it borders on flat-earther mentality.

A "pro" user is someone who uses their computer for professional applications. That does NOT make them tinkerers (though they might be). For that "pro" user, it simply isn't cost-effective for them to work on their own system. If you command money from James Cameron/Steven Spielberg for doing editing on their next "big things" to the tune of $200 an hour, spending a couple of hours doing your own tech support at $25 is a really bad deal.

You're better off doing your work an some other machine while you pay someone else to handle the light work of installing an SSD (or just ordering it that way in the first place). I don't install SSDs in my computer I work. I take it over to IT and say "can you guys upgrade this thing?" Do I know how to install an SSD? Sure. But, that isn't what my boss pays me to do. We've got people for that.

Now, somewhere out there is an over achieving pro user who will, for whatever reason, want to install their own SSD. This person will do the same thing everyone else did/does who wants to take this path. Because they weren't born knowing how to change SSDs, they will educate themselves on the process and just do it. See? Problem solved.
Score: 9 Votes (Like | Disagree)

guerro
I am waiting for the video: How to Buy a House With $65k Instead of a Worthless Depreciating Asset.
Score: 9 Votes (Like | Disagree)

BigBoy2018
Is there not a way to just add a SATA card and then install a garden variety SATA ssd on your own? (without needing and Apple certified technician).

If not, that's a huge fail.
Score: 5 Votes (Like | Disagree)
Read All Comments