Apple Begins Buying Aluminum Made With Carbon-Free Process, Plans to Use in Select Products

In May 2018, Apple announced that it had helped facilitate a collaboration between two of the world's largest aluminum producers, Alcoa and Rio Tinto, on a new carbon-free aluminum smelting process. Together, the companies formed a joint venture called Elysis, working to develop the patented technology further. 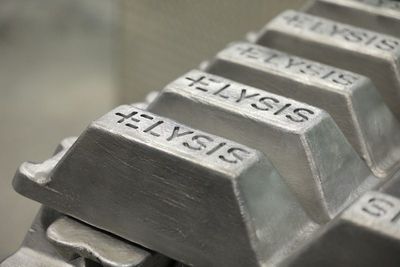 Today, Apple said it has now bought the first-ever commercial batch of carbon-free aluminum from Elysis, according to Reuters. The aluminum will be shipped from a Pittsburgh facility and used in unspecified Apple products. iPhones, iPads, Macs, and many other Apple products use aluminum.

"For more than 130 years, aluminum - a material common to so many products consumers use daily - has been produced the same way. That's about to change," said Apple's environmental chief Lisa Jackson.

Alcoa and Rio Tinto aim to commercialize and license the carbon-free smelting process beginning in 2024. If fully developed and implemented, it will eliminate direct greenhouse gas emissions from the traditional aluminum smelting process developed over 130 years ago, according to Apple.

Alcoa said it has been producing aluminum at its facility near Pittsburgh with the new process, to varying degrees, since 2009. The process resulted from decades of research and is described by Apple as the most significant innovation in the aluminum industry in more than a century.

Elysis also plans to manufacture the carbon-free aluminum at a CA$50 million research facility under construction in Saguenay, Quebec, which is slated to open in the second half of 2020, according to the report.

AngerDanger
Anybody else in the mood for a Toblerone?

They is no such thing as carbon free, they will allways be some form of energy requirements that has a carbon footprint what you can go is reduce it as much as possible and that’s what Apple is doing and it’s good it’s the way forward reduce it as much as possible but you will never be able to eliminate it and these daft claims carbon free is just BS PR

While not 100% carbon free, the plant in Saguenay is most likely 100% powered by hydro electricity. Yes of course I'm sure the product will be moved by trucks using regular diesel etc etc But diminishing the environmental impact of making the product is good regardless.
Score: 12 Votes (Like | Disagree)

Bloody CO2 lies! Companies better invest in reduction of pollution (that goes much further than removing a few chemicals from product materials).

Oh gee, someone didn't sleep well? All efforts to restore and protect the environment are necessary. In a very short time, human impact has become nearly irreversible!

It is largely B.S PR
the TLDR: is are there using cryolite or some proprietary derivative, it's used as an solvent for aluminum oxide and allows for smelting at a lower temperature ( thus you need to put less energy in to smelt = technically more green) it also gives off oxygen as a byproduct rather than other emissions, so for virtue signalling it seems more green that way.

Apple will then argue because they're purchasing carbon credits so the energy they do use from the smelting is green already, let's not forget the vast majority of all aluminum used today is already from recycled sources, it's one of the easiest metals the smelt, it's most hobbyists learn with because of that.

I'm more annoyed that Canadian company like Elysis That received Canadian government subsidies to create this aluminum used those to open up Pittsburgh plant and is now selling to Apple so indirectly my tax dollars went to benefit the American economy rather than the Canadian one presumably to avoid higher tariff etc. either way it doesn't benefit me or my country but that's neither here nor there.

A $50M facility is being constructed in Quebec. That surely has long term benefits for the Canadian economy.
Score: 8 Votes (Like | Disagree)

I'm excited to see what Apple makes with this. Very excited.

What? They're going to make things out of it that they already make out of aluminum. The process changed, not the material.
Score: 7 Votes (Like | Disagree)

dumastudetto
I'm excited to see what Apple makes with this. Very excited.
Score: 6 Votes (Like | Disagree)
Read All Comments

Thursday September 29, 2022 12:38 pm PDT by Juli Clover
Tony Blevins, Apple's vice president of procurement, is set to depart the company after he made a crude comment about his profession in a recent TikTok video, reports Bloomberg. Blevins was in a video by TikTok creator Daniel Mac, who was doing a series on the jobs of people he spotted with expensive cars. After seeing Blevins in an expensive Mercedes-Benz SLR McLaren, Mac asked Blevins what ...
Read Full Article • 225 comments