'The Morning Show' Producers on Negative Reviews: 'There Were a Lot of Apple Haters and Wanting Apple to Fail'

A few weeks after the premiere of Apple TV+, the executive producers of "The Morning Show" have decided to respond to the show's more negative critics at the Recode Code Media conference in Los Angeles (via Recode). 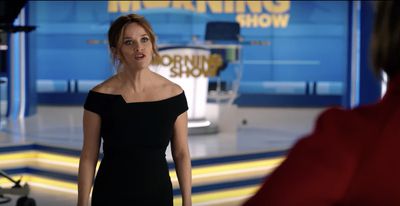 According to Mimi Leder and Kerry Ehrin, many of the negative reviews came from writers who went into the show with the purpose of hating it, due to Apple. Leder summed this up by stating that some reviews "felt like an attack on Apple."

“When those reviews came in, I didn’t know what show they were watching. And I just kind of thought they were nuts,” said Leder, director and executive producer of the show, who is known for her previous work on shows like ER and The West Wing. “I just felt there were a lot of Apple haters and wanting Apple to fail.”

“We’re focused on the story we’re telling, the characters. We’re inside of it. So when you see reviews that are looking at it from the whole business aspect, like, ‘What is Apple doing?’ and, ‘They spent this much money on it’ — it’s kind of separate from us.”

"The Morning Show" has its fair share of both critics and fans, currently sitting at a 63 percent on Rotten Tomatoes with a more favorable 95 percent audience score. Leder referenced statistics like these and said, "The good news is that people love the show, and we love the show, and that's what matters."

At the same time, another ‌Apple TV+‌ show is getting ready to launch on the service in just over a week. On November 28, Apple will debut the first three episodes of "Servant" from producer M. Night Shyamalan, and afterwards new episodes will debut every Friday, similar to the current release schedule of "The Morning Show," "See," and "For All Mankind."

Ahead of the streaming launch, "Servant" premiered at the BAM Howard Gilman Opera House in Brooklyn, New York, where stars Toby Kebbell, Lauren Ambrose, Nell Tiger Free, and Rupert Grint were in attendance. The show's writer and creator Tony Basgallop was also at the premiere, as well as Shyamalan, who will direct the series.

The first full trailer for "Servant" premiered a few weeks ago. The show follows a Philadelphia couple who are in mourning after a tragedy strikes their family. Soon after, they hire a young nanny to take care of their child and unknowingly set a series of strange events into motion.

Head to the MacRumors Apple TV+ forum to join in discussions for all of the new shows that have launched, and will soon launch, on Apple's streaming service.

bbednarz
Ya know, I don't doubt that at all tbh.

Isn't this line of argument akin to victim blaming?!?

It's not the show stinking. It's that the audience is messed up.

When critics say is is bad, but the general population says its great... Maybe it's just the critics.
Score: 37 Votes (Like | Disagree)

iGeneo
The audience score versus the critic score is quite telling
Score: 32 Votes (Like | Disagree)

smaffei
Isn't this line of argument akin to victim blaming?!?

It's not the show stinking. It's that the audience is messed up.
Score: 30 Votes (Like | Disagree)

Isn't this line of argument akin to victim blaming?!?

No. If Rotten Tomatoes is anything to go by, the viewers love it.

It's the critics who are being, er, critical.

I always judge movies etc by the audience score, not the critics score.
Score: 26 Votes (Like | Disagree)
Read All Comments