Apple today introduced its widely rumored 16-inch MacBook Pro with a larger display and slimmer bezels, a new Magic Keyboard with a scissor mechanism and physical Esc key, up to 64GB of RAM, up to 8TB of SSD storage, AMD Radeon Pro 5000M graphics options, upgraded speakers and microphones, and more. 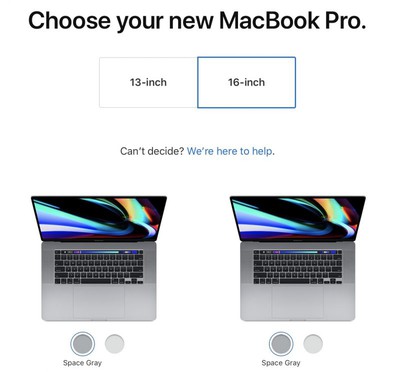 The new 16-inch MacBook Pro is available to order today through Apple.com and the Apple Store app in many countries. It will be available in Apple Stores and select Apple Authorized Resellers in the United States later this week and is "coming soon" to stores around the world, according to Apple.

The 9th Gen Intel CPU with hardware vulnerabilities is a hair in the soup.

Don't think I've seen a single positive thing written by you. Don't get me wrong. Apple has done multiple terrible decisions the last years. But this release is a tiny step in the right direction, so maybe be a little happy about that, yeah?
Score: 32 Votes (Like | Disagree)

danny1305
EXACTLY what everyone has been asking for...and yet some will still complain
Score: 19 Votes (Like | Disagree)

BigBoy2018
Sorry, but I just have to chuckle at all the folks who a month or two ago bought the 2019 15-incher, with the flawed keyboard, way worse thermal management ... absolutely convinced this one wouldn't come out anytime soon, or be way too expensive.

Now you're kinda stuck with one of the laptops that is part of what will arguably be remembered as one of the worst series of laptop designs Apple ever made.
Score: 13 Votes (Like | Disagree)

EXACTLY what everyone has been asking for...and yet some will still complain

No , you are wrong - believe or not - some of us use USB-A ports, some of us use Magic Safe, some of use SD cards, some of us don't see the point of touch bar etc ( and please don;t say me to buy a dongles ) ....At least ( I hope ) they fixed the worst keyboard in the history....
Score: 11 Votes (Like | Disagree)
Read All Comments

Monday July 26, 2021 11:35 am PDT by Juli Clover
Apple today updated its Apple at Work website with a new section dedicated to the Mac, which offers up 11 reasons why "Mac means business." On the webpage, Apple highlights the M1 chip as the number one reason why business users should choose a Mac, offering up an M1 overview [PDF] that explains the benefits of the M1 chip. The information isn't new, but it does provide a look at all of...
Read Full Article • 87 comments