Monday September 23, 2019 3:15 pm PDT by Juli Clover
Apple recently added the second-generation Apple Pencil to its online store for refurbished products in the United States, offering the accessory at a discounted price for the first time.

Apple is selling the second-generation Apple Pencil for $109, which is a $20 discount off of the original $129 price. $109 is the lowest price that we've seen on the ‌Apple Pencil‌ 2, so Apple's deal is solid for anyone looking to pick up a new ‌Apple Pencil‌. 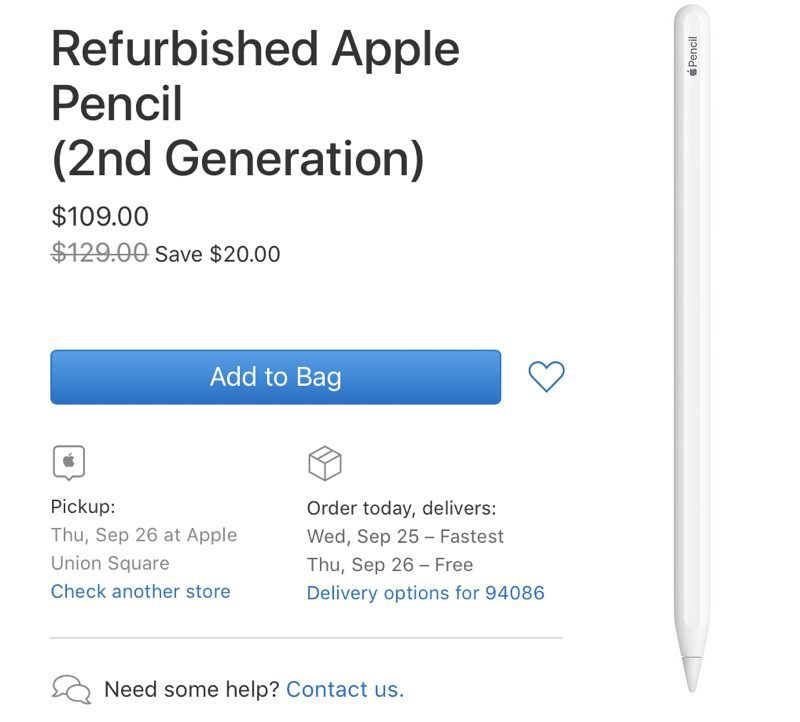 Next-generation ‌iPad Pro‌ models that are in development will also likely be compatible with ‌Apple Pencil‌ 2.

Compared to the original ‌Apple Pencil‌, the ‌Apple Pencil‌ 2 does away with the Lightning port at the top of the device, instead charging wirelessly via the ‌iPad Pro‌ itself through a magnetic connection.

The second-generation ‌Apple Pencil‌ also supports gestures, so with a tap, you can change brushes or quickly switch from a brush to an eraser without having to pick up the pencil and select a new tool.

squizzler
The places that second hand pencil might have been...

It's a charity if it were free, dude.
Rating: 11 Votes

Literally the most advanced, best pencil available today with the lowest latency by far, especially with the iOS 13 update. I'd love for it to be cheaper too but I don't think people appreciate the tech in products like this, or HomePod.
Rating: 11 Votes

Malithion
Should be $50 jeez
Rating: 10 Votes

Why is that “shameful”? You pay more, you get more.

Sometimes with Apple you pay more and get less, 5W charger and no USB-C cable for X and XS iPhone. Those models were just not “Pro” enough to include one. ;)
Rating: 5 Votes

sdilley14
It's hilarious how expensive that thing is, jeesh!
Rating: 5 Votes

When I think of the time from when the Pencil 2 was released, to how many subsequent updates/remakes of the iPad (all versions) have been released in the meantime ... and yet it *still* only works on 2 models?


Magnetic attachment and inductive charging are features reserved for Pro models. So is FaceID and some other things.

Why is that “shameful”? You pay more, you get more.
Rating: 4 Votes