Discounts on the latest iMacs remain ongoing this month, with Amazon and B&H Photo now offering a new all-time-low price on the 27-inch Retina iMac with 8GB RAM and a 1TB Fusion Drive. This model is now priced at $1,599.00, down from $1,799.00. 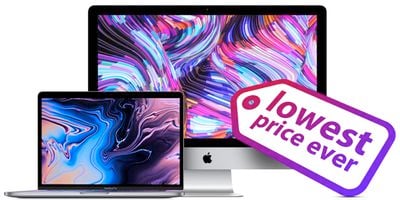 These retailers are also discounting Apple's new MacBook Pro, with prices also starting at $1,599.00. Both 13-inch and 15-inch MacBook Pro models are on sale, and you can find all of these markdowns in the lists below.

More of the latest Apple-related sales can be found in our full Deals Roundup. This week that includes ongoing discounts on the AirPods with Wireless Charging Case, Pad & Quill's new 25 percent off sitewide sale, and more.

masterleep
Fusion drives and other forms of spinning rust should be illegal.
Score: 6 Votes (Like | Disagree)

Why? Some people need the extra space and would rather not spend $1000 for a multi-TB SSD when a HD would do just fine.

Because he thinks saying that makes him sound edgy.
Score: 5 Votes (Like | Disagree)

Fusion drives and other forms of spinning rust should be illegal.

Why? Some people need the extra space and would rather not spend $1000 for a multi-TB SSD when a HD would do just fine.
Score: 2 Votes (Like | Disagree)

Ripoff with junk keyboard. No Apple portable is safe to buy.

iMac is great. Only Last decent Mac that Jonny Ive has not destroyed in the Mac line up with his vanity projects.

Keyboard has been fine for me. (Knock on wood.) Have not had problems with heat or throttling. Overall I'm satisfied with it as a computer, I have as much confidence in it as I've had in any other Mac I've owned.

What disappoints me though is that my 2018 MBP is only 9 months old and already starting to show similar levels of wear on it's finish as the 2013 it replaced. Something is different about the aluminum on these, because it isn't treated any different than the 2013 was.

How incredibly naive. These are desktops, not laptops. If you have multi-TB's of SSD in your desktop, you're not very bright.

Or you need multiple TB of reliable flash storage... Most people don't, though most people spending $1,600 on a computer would expect it to not be handicapped because of the choices made by the manufacturer. macOS has evolved to providing a sub-standard experience when booting from a traditional Hard Drive and an SSD option needs to be standard.

Not everyone needs the bleeding edge PCIe SSDs Apple offers. You can get name brand 1TB PCIe SSDs for $100 now. Everyday users will not appreciate the difference between one of those and the high-end selection Apple chooses to offer for $500 currently, but it will destroy a Fusion Drive still.

This is the single most critical component that impacts overall performance of a computer for 98% of users. Apple still treating it like something exotic should be embarrassing.
Score: 2 Votes (Like | Disagree)

I just wish they'd come with proper GPUs... like dead set, all you can get is dodgy integrated graphics!!!

Recently I've been searching for a new Mac that can play:
- Shenmue 1 & 2 (requires a GeForce GTX 650 Ti which is a ~2012 mid-range GPU).
- Shenmue 3 (not yet released)
- Dreamfall Chapters (may struggle with a GTX 650 Ti... high requirements because it's an ambitious indie game)
- A few emulated Saturn and Dreamcast games using Mednafen and Redream

If the Mac Mini and iMac came with a modern, mid-range GPU (like a $300 GPU... not unreasonable IMO!!) then I could confidently murder any of the above games (only 3 circumstances because I'm not really a gamer... I just wanna play some casual games).

Instead, my options are to:
- Buy a Mac Pro for $$$$$$$$ (way more than what I'm willing to spend on a casual machine)
- Buy a hackintosh and put up with having to hack it (and pray it will still work) after every update
- Buy an eGPU for $$$$$$$$ that could buy me a high-end GPU instead (i.e. pay way too much for mediocre gear)
- Buy a PC and a Mac (although I don't want a PC) so that I can use the PC for casual gaming and just accept that Macs can't even do casual gaming

IMO the current Mac lineup is a sick joke. Add to it the fact your HD and RAM can't be updated and cough cough... I'm finding it really difficult to justify upgrading my ~2012 Mini and ~2010 MBP because:
- My current models have upgradable RAM and HDs
- My current models are fast enough
- There's no guarantee that new models are gonna get a few not particularly demanding games over the line... it's really annoying that we're forced to either accept mediocre graphics, fork out $$$$ for so-so graphics or decide that Apple's not for us... I've been a fan since the 80's and this is the first time Apple's current-gen graphics setup has been inadequate for casual gaming

For playing games you don’t need a Mac. Get a cheap PC or build one to your dream specs JUST for the games and be done with it. Mac is not for games still holds true. There is nothing wrong on having a games PC and a Mac for the rest.
Score: 1 Votes (Like | Disagree)
Read All Comments

Friday May 27, 2022 2:15 pm PDT by Juli Clover
There's just over a week to go until the 2022 Worldwide Developers Conference, which is one of the biggest Apple events of the year. We've heard surprisingly little about iOS 16 this year, so we're in for some major surprises when June 6 rolls around. As we wait for the keynote event, we thought we'd share some iOS 16 wishlist items from MacRumors readers, because who knows? We just might...
Read Full Article • 244 comments

Friday May 27, 2022 6:54 am PDT by Hartley Charlton
The "A16" chip for the iPhone will reportedly be manufactured with the same process as the iPhone 13's A15 Bionic, with Apple saving a bigger performance leap for the "M2" chip designed for its next-generation Macs. Meanwhile, the company is working on a "final" M1 chip variant that uses more powerful cores from the A15, according to the leaker known as "ShrimpApplePro." In a thread on...
Read Full Article • 161 comments