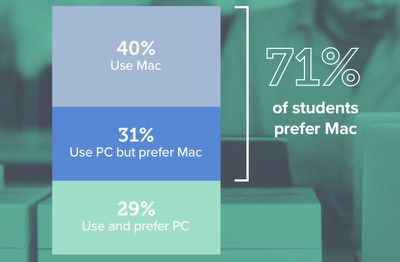 Students who said they preferred Mac over PCs offered up several different reasons. 59 percent cited ease of use, 57 percent cited durability, and 49 cited synchronization over other devices. 64 percent said they "like the brand," while 60 percent preferred the style and design of the Mac.

Among those who said they preferred PCs, the only dominant factor in the decision was price.

"Employers are looking for top talent in a competitive job market. Providing workers with the tools they know and love is a key way to attract, retain and empower them to be their most productive," said Dean Hager, CEO, Jamf. "The next generation of job seekers wants their tech to just work so that they can focus on their job. They see Mac as more modern, intuitive and reliable - and would like to continue to use it as they launch their careers."

Jamf's survey, conducted by Vanson Bourne, is based on responses from 2,244 current college and university students across five countries.

BarredOwl
If only Apple loved the Mac as much as their long-time customers...
Score: 74 Votes (Like | Disagree)

TwoBytes
A survey conducted by a company that makes mac only software. I'm sure there is no bias in this at all...
Score: 49 Votes (Like | Disagree)

satchmo
A large number of those 71% will be greatly disappointed when they enter the real world.
Score: 30 Votes (Like | Disagree)

Moonjumper
Where is the option for "Use Mac but prefer PC"? It should be there for accuracy. There are people that crazy!
Score: 19 Votes (Like | Disagree)

otternonsense
Users have loved the Mac for decades. I came to Apple because of the Mac, and I hope I won't have to leave because of the Mac. It's Apple that's turned it into a shadow of its former self, and still the Mac brand is persevering.

I hope there will be a reversal. But after years of fruitlessly waiting for Tim to deliver his fantastical "pipeline", the hope is gone dry. The only thing that keeps OSX alive in the minds of users is that despite their great strides, Windows is still a worse experience in comparison.

As it is, I cannot recommend in good conscience a Mac to anyone.
Score: 18 Votes (Like | Disagree)

MacOS is the superior OS. :)

However, it is as I suspected: Brand cachet is no. 1

I don’t see how MacOS is superior, maybe in usability but that’s about it.

I am in Engineering and in my field Windows and Linux distros are the best options. I don’t know what the people in this survey study but I can’t use MacOS for all my professional needs.

If gaming is within your likes, you also need Windows.

It is the same when I read that “iPad” replaced their computer... what the F?... I love my iPad but it is miles away from replacing a computer, not even for web browsing.
Score: 12 Votes (Like | Disagree)
Read All Comments