Ive will be joined by actor and comedian Stephen Fry for a session titled "The Object of Language and the Language of Objects." 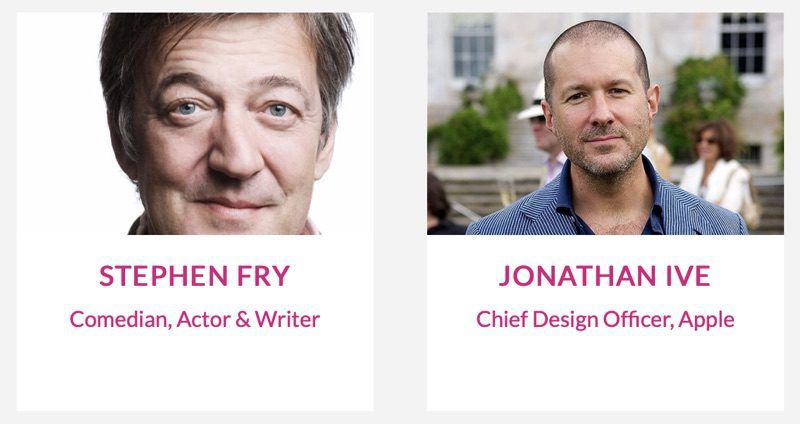 Actor, comedian, raconteur, and author, Stephen Fry shares his wit and wisdom with Jony Ive, the man who, by designing three of the most iconic products of our age - the iPod, iPad, and iPhone- has changed your world probably more than any other single living human being.

Tickets were available for the event from the Dalkey Book Festival website for 30 euros, but have all sold out at this time.

Stephen Fry and Jony Ive know one another, and in 2015, Fry wrote a profile on Ive following the announcement of his chief design officer title. In the past, Fry has also profiled Steve Jobs, and he's long been acquainted with Apple executives.

Greymacuser
To match Jony's design aesthetic, the room will be tiny, impractically shaped, have no ventilation and all the chairs will be soldered in place so no one can move them.
Rating: 41 Votes

nouveau_redneck
Will he address the keyboard blunder caused by his obsessive need for thin?
Rating: 15 Votes

To match Jony's design aesthetic, the room will be tiny, impractically shaped, have no ventilation and all the chairs will be soldered in place so no one can move them.


And then we get to see how Jony likes it when he overheats.
Rating: 9 Votes

Most overrated and biggest ego at Apple IMHO.


I see him as Pippen. Without Jordan, he can't really be as great. He needs Steve to tell him that his design suck so he can go back to trying to make it better. There's no Steve around now to tell him that. iPhone w a camera bump? Argh.. Notch, argh. pencil charged by plugging into ipad, goddam that was ugly.
Rating: 8 Votes

Please make sure you aren't driving or operating any machinery whilst doing this. :oops:
Rating: 8 Votes

Dave-Z
"At Apple, we believe the corporation should disappear behind the executive team, leaving a persona of elegance and beauty depicted in continuous words shaped by mouths that meet often with others and share how beautiful our vision and thoughts are. These thoughts transcend the simple narrative used to describe them, enriching the lives of our customers with pleasantness. These releases to the press will continue as a new part of our core values to ensure the world is brought to an elevated level of understanding of our vision."
Rating: 8 Votes

now i see it
maybe to announce his retirement?
Rating: 6 Votes

I wish Jony would change the keyboard of the MacBook Pro back to something that works...


Impossible, that would be 1mm thicker.
Rating: 6 Votes

Most overrated and biggest ego at Apple IMHO.


Hardly overrated as a huge part of Apple's extraordinary success is due to Ive. And many companies try to emulate his designs.

Perhaps you have issues with his success?
Rating: 6 Votes