On the latest episode of the Connected podcast on Relay FM, MacStories editor-in-chief Federico Viticci suggested that USB mouse support could eventually be coming to the iPad Pro as an accessibility feature. 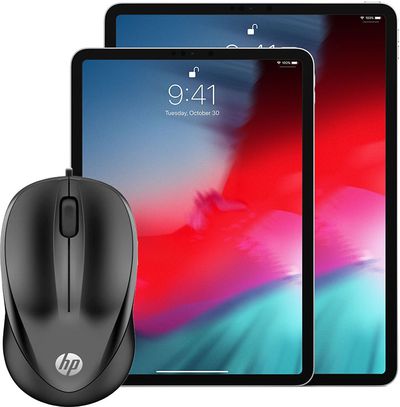 It has long been possible to use a compatible adaptive accessory like a joystick or trackball with Apple's accessibility feature AssistiveTouch to control an iPhone, ‌iPad‌, or iPod touch, but USB mouse support would seemingly eliminate the need for any specialized hardware or adapters.

Viticci cautions this is something he "heard months ago" and he isn't sure "if it'll happen," but as noted by iDownloadBlog, well-known developer Steve Troughton-Smith tweeted that "as far as I'm aware, that is indeed in the works."

If you missed last week's @_connectedfm, @viticci had a pretty interesting scoop that he'd been sitting on re mouse support coming to iPad as an accessibility feature. As far as I'm aware, that *is* indeed in the works. I feel like every pro user will turn that on, day one 😂 — Steve Troughton-Smith (@stroughtonsmith) April 22, 2019

As noted by Viticci, this wouldn't be the first time Apple enables a feature "under the catch-all umbrella of accessibility." Any user would presumably be able to toggle on USB mouse support in the Settings app, with Troughton-Smith adding that "I feel like every pro user will turn that on, day one."

In a follow-up tweet, Troughton-Smith speculated that iOS could perhaps have "a small circle or dot" for a cursor rather than a traditional pointer, but the exact implementation of mouse support if any remains to be seen.

No specific timeframe has been provided for USB mouse support on the ‌iPad‌, but it could presumably be added as early as iOS 13, which is expected to be unveiled at Apple's annual Worldwide Developers Conference in June. The software update should be publicly released in September alongside new iPhones.

Listen to Connected on Relay FM. Viticci's remarks about the potential for USB mouse support on the ‌iPad‌ begin at the 1:08:35 mark.

nicho
USB mouse support would be a little odd... why no bluetooth mouse support in this day and age?
Score: 56 Votes (Like | Disagree)

I'd love to be able to plug in a thumbdrive and see it pop up in the Files app. I'm sure a lot of us feel the same way, and hope Apple finally adds this capability in iOS 13.

I would love a mouse (bluetooth, USB, I don't give a crap) on the iPad, so when I get an after hours call, I can just carry a small messenger bag and an iPad, instead of my damn laptop everywhere.

I ended up fixing the problem by getting a Surface, which is actually a real computer. I love MacOS and iOS, but some of this stuff is getting really tiresome from an actual productivity standpoint.
Score: 12 Votes (Like | Disagree)

IMO, one of the biggest things holding the iPad back when using a keyboard is lack of mouse support. Having to reach up and touch the screen for the many things that aren't supported with keyboard shortcuts is a lesson in bad ergonomics. Seems kind of strange to only offer it via USB though.

It’s this exact same ergonomics argument Apple made for not adding touch screens to MacBooks — ‘the need to reach up and touch the screen would be too difficult and uncomfortable’. Yet they have no problem marketing and selling an iPad with a keyboard that creates that exact situation without any other way to interact with the screen but to hold ones arm in midair to touch the screen.

Apple hypocrisy at its finest.
Score: 9 Votes (Like | Disagree)

markfc
I’m still waiting for Apple Mouse support on iPad. It would make teamviewering so much easier!
Score: 9 Votes (Like | Disagree)

I'd love to be able to plug in a thumbdrive and see it pop up in the Files app. I'm sure a lot of us feel the same way, and hope Apple finally adds this capability in iOS 13.
Score: 9 Votes (Like | Disagree)
Read All Comments