Netflix has begun testing a new feature on mobile that allows select users to "Play a Popular Episode" of certain TV shows, without having to scroll through and pick which one they want to watch. As spotted by Android Police, the test only appears to be on the Android app as of now. 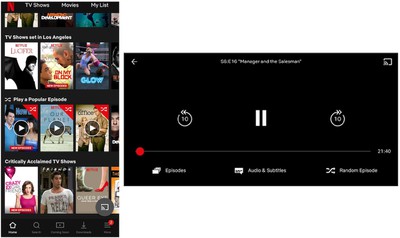 Images via Android Police
Additionally, users have noticed that in the playback controls of a TV show, there is a new "Random Episode" button. With this feature you would be able to shuffle around within the TV show you're already watching, which would be useful for people who watch their favorite shows repeatedly and don't necessarily need to see everything in order.

As with all tests, it's unclear if Netflix will ever launch these features to a wide audience on both Android and iOS devices, or other platforms. If you're on Android, the random episode test is on v7.6.0 build 19 34157 of the Netflix Android app.

Netflix will be gaining competition in the streaming market later this year when Apple TV+ and Disney+ launch, but the company has said that it isn't worried about these launches because of the "differing nature" of the content on offer. The company is also ramping up original content production, which means a price hike to $12.99/month for the popular HD streaming plan for all users beginning in May.

Azeroth1
If you can’t decide what to watch on your own, go outside or read a book.
Score: 20 Votes (Like | Disagree)

Master Atrus
I could see the value of "I just want to watch something" and have Netflix pick a random episode of a popular TV show. At least then it is kind of like the old days of channel surfing ... But having me pick the show and then choosing a random episode seems weird. If I knew what show I wanted to watch, wouldn't I watch it in order?
Score: 8 Votes (Like | Disagree)

I could see the value of "I just want to watch something" and have Netflix pick a random episode of a popular TV show. At least then it is kind of like the old days of channel surfing ... But having me pick the show and then choosing a random episode seems weird. If I knew what show I wanted to watch, wouldn't I watch it in order?

Seems good for sitcom shows like Friends where you don't care about the order.
Score: 5 Votes (Like | Disagree)

Yeah.... Tell me what to watch. Then tell me what to eat, wear, where to live, and finally who to vote for. No thanks, if I can't make a decision, I can just turn it off and do something worthwhile.

Relax pal, every music player has a shuffle button too. Its not some giant conspiracy. Also your point if counter intuitive.....you can still make a decision.... NOT USE THE DAMN SHUFFLE BUTTON.
[doublepost=1555681576][/doublepost]

I could see the value of "I just want to watch something" and have Netflix pick a random episode of a popular TV show. At least then it is kind of like the old days of channel surfing ... But having me pick the show and then choosing a random episode seems weird. If I knew what show I wanted to watch, wouldn't I watch it in order?

No....there are tons of older shows that have zero need to be in order. The top ones that pop into my mind are nearly every Star Trek series, The Office, Friends......there are plenty of shows this would be useful for and I've wanted a shuffle feature for years. Sometimes I want to watch a show but spend 5-10 minutes figuring out which episode.
Score: 4 Votes (Like | Disagree)

b92b0b33ef5340e
How about signing licensing deals so Netflix has something I would want to watch?

Or you know the star rating system when their recommendation system actually worked?
Score: 4 Votes (Like | Disagree)
Read All Comments