Microsoft has revealed that one of its support agent's credentials were compromised, enabling unauthorized parties to access information from a "limited subset" of users, including e-mail addresses, folder names, subject lines, and the names of recent recipients, between January 1 and March 28 of 2019. 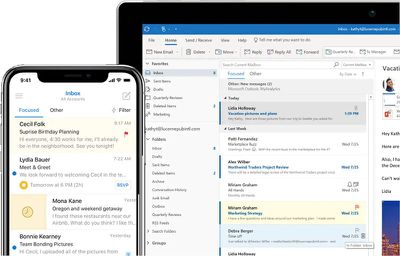 It gets worse, unfortunately. In a statement issued to The Verge, Microsoft said that the unauthorized parties had access to the actual content of roughly six percent of affected email accounts, as exposed by Motherboard.

In an email to affected users shared by TechCrunch, Microsoft said it has now blocked this unauthorized access, disabled the passwords of compromised accounts, and increased detection and monitoring to further protect users. Microsoft recommends users change their passwords out of an abundance of caution.

The breach affected a "limited subset" of Microsoft-managed email accounts, including Outlook, MSN, and Hotmail email addresses. No enterprise customers are believed to be affected, according to TechCrunch.

Microsoft told affected users that it has no indication why the information was viewed or how it may have been used. The company has yet to reveal how it discovered the breach, how the support agent's credentials were compromised, or if the agent was a Microsoft employee, according to TechCrunch.

High time for a "internet reboot" 2.0

It's high time for companies to be held accountable for breeches in a severe monetary fashion.

The only way they are going to get better at security, or take security seriously, is if it affects their bottom line in a big way if they don't.
Score: 7 Votes (Like | Disagree)

JetTester
Yet another huge company gets hacked and loses customer data. Is there no accountability anywhere now?
Score: 4 Votes (Like | Disagree)

Good thing nobody uses Outlook.com for anything serious, lol.

I like outlook.com WAY more than gmail. Just because you don't, so that means no one uses outlook.com :rolleyes:
Score: 4 Votes (Like | Disagree)

ArtOfWarfare
And this is why I always say - never write anything down that you wouldn't want everyone to know. I'm sure the hackers will sell the email content to someone who will blackmail the victims.
Score: 2 Votes (Like | Disagree)

It was a joke about how few people use it. BTW I don't use Gmail.

:rolleyes: thousands of companies use it. Including the company I work for with 25,000 users. but yeah few people use it.
Score: 2 Votes (Like | Disagree)
Read All Comments