Geekbench's John Poole this afternoon shared a series of 2019 iMac benchmarks, giving us a look at the performance boosts offered by Intel's 8th and 9th-generation Coffee Lake chips. 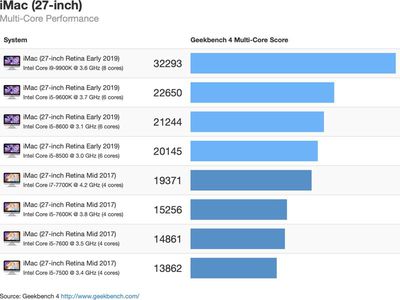 These chips are two years apart, so it is no surprise that even the mid-level chips are outperforming the higher-end chips from 2017.

Gains are more modest for the 21.5-inch 4K ‌iMac‌ models, but still significant. Single-core performance is up 5 to 10 percent, while multi-core performance has increased by 10 to 50 percent.

As Poole points out, the performance gains in the 2019 ‌iMac‌ models are due to higher frequencies and core counts as the underlying architecture hasn't been updated.

Poole says that while there's a significant boost when it comes to multi-core performance in the new iMacs, along with a decent boost in single-core performance, the increase isn't enough to "justify upgrading from a 2017 ‌iMac‌."

Apple's newest ‌iMac‌ models were announced last week and have been arriving to customers this week. Aside from Intel's new 8th and 9th-generation Coffee Lake chips, Radeon Pro Vega graphics options, and faster RAM, there have been no other improvements to the 2019 ‌iMac‌ models.

Not-Sure
I have decided, for 3D rendering, video editing and everything related to graphics and video... a PC. Way faster, upgradable and way cheaper. For audio, music apps and hanging on the internet... a Mac. I have a 2014 15" MBP and works just fine with an external monitor, Logic Pro, Ableton, everything! But I am not wasting money on an iMac, not worth it.

auralux
Typing this on my '19 i9 iMac right now. Couldn't be happier. Blazing fast, dead quiet and surprisingly cool. I find it quite humorous the amount of people taking the piss with a machine they do not have in their possession. Maybe it's jealousy, ignorance or trolling. Not sure which...?
Score: 30 Votes (Like | Disagree)

Kobayagi
It's no suprise that newer chips are faster than 2 year old ones. What I'm interested in is what the temperatures are. The i7 2017 iMac gets really hot with heavy use. Wit the same internal cooling solution, does the i9 throttle?
Score: 12 Votes (Like | Disagree)

Pathetic results, a Hackintosh with the same CPU (9900k) and proper cooling is about 25% faster.

for just 25% faster, we don't care about the hassle
Score: 11 Votes (Like | Disagree)
Read All Comments