Multiple rumors have suggested at least one of the 2019 iPhone models will feature a triple-lens camera design, but smartphone leaker Steve Hemmerstoffer (aka OnLeaks) believes Apple is still finalizing just what the triple-lens design will look like.

Earlier this month, Hemmerstoffer shared one possible prototype design featuring a square-shaped camera layout, and today, he's teamed up with Indian site CompareRaja to show us another design that Apple is allegedly working on. 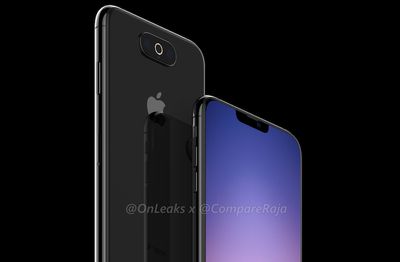 The new renders feature an iPhone with a slimmed down notch for the front-facing camera and TrueDepth system, along with a triple-lens rear camera positioned in the center of the device.

The camera features three lenses in a horizontal arrangement, with a flash located around the middle of the three lenses. A microphone is located below, while the volume buttons are on the left side of the device and the power button is on the right, in line with current devices.

According to Hemmerstoffer and CompareRaja, this set of renderings, along with the previous set that featured a larger square-shaped camera layout are both "100% legit prototypes."

It's not clear if these renderings are accurate depictions of the iPhone design Apple might use in 2019, nor do we know if Apple is still attempting to decide on a final look, but Hemmerstoffer has a track record of sourcing accurate information from Apple's supply chain.

At this point in time, no other source has commented on the triple-lens camera layout Apple might use, so we'll need to wait for further leaks to get a clearer picture of how Apple plans to implement a three-lens design.

GreenPixel
This looks a little better than the last rumor, at least.
Score: 23 Votes (Like | Disagree)

Unity451
I prefer the omni-camera approach...

archvile
This looks much better than the quad camera/flash abortion that was shown the other day.
Score: 10 Votes (Like | Disagree)

bbplayer5
Maybe im the only one... but... i dont really care what the back of my phone looks like.
Score: 6 Votes (Like | Disagree)
Read All Comments

Wednesday November 30, 2022 2:39 am PST by Sami Fathi
Geekbench scores allegedly for the upcoming "M2 Max" chip have surfaced online, offering a closer look at the performance levels and specific details of the forthcoming Apple silicon processor. The Geekbench results, first spotted on Twitter, are for a Mac configuration of with the M2 Max chip, a 12-core CPU, and 96GB of memory. The Mac listed has an identifier "Mac14,6," which could be...
Read Full Article • 243 comments