It is now possible to use the My Verizon app to activate eSIM service on an iPhone XS, iPhone XS Max, or iPhone XR in the United States. 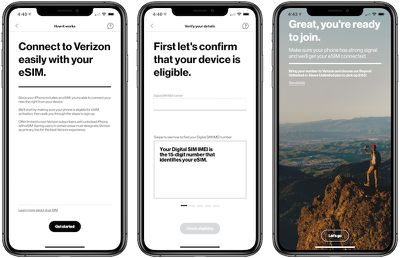 The app was updated today to allow Verizon customers to purchase a cellular plan for the eSIM line of an iPhone without needing to visit a Verizon store. The in-app process should be more straightforward and convenient.

"My Verizon" changelog via Gabriel Lewis
Verizon and AT&T rolled out eSIM support last week, while T-Mobile is expected to offer an in-app solution for setting up eSIM later this month.

Other carriers offering eSIM service include Bell, Fido, Rogers, Virgin Mobile, and Lucky Mobile in Canada, Deutsche Telekom and Vodafone in Germany, T-Mobile in Austria and Czech Republic, Hrvatski Telekom in Croatia, 3 in Denmark and Sweden, Telia in Finland and Estonia, EE in the United Kingdom, and many others.

iPhone XS, iPhone XS Max, and iPhone XR models have both a physical SIM and an eSIM that allows for dual SIM, dual standby. This means you can have two lines of service on one iPhone, which is useful for purchasing data-only plans while traveling or having personal and business lines on a single iPhone.

Update: This process appears to be limited to customers of other carriers who are looking to add Verizon service via the eSIM.

spinedoc77
Hmm can you switch from a Verizon physical sim to the esim through the app? I'd like to make my Verizon phone use the esim to I can experiment with a Tmobile physical sim.
Score: 6 Votes (Like | Disagree)

Instead of being the frontrunner of adopting latest technology (Wi-Fi Calling, VoLTE, Cellular Data Usage), T-Mobile falls to embarrassing and distant 3rd place with eSIM.

Compared to the other things you mention, the eSim is a distant 10th on my list. ;)

Yes, later this month is a huge falling behind, T-Mobile should be ashamed/s:rolleyes:

edit. Shoot, i forgot this is macrumors forums. The forum where someone always finds a way to complain. Here's the handy Macrumors bingo card, guess we need to add something about cell carriers. :D

really Verizon? no one copy edits you're release notes?
Score: 3 Votes (Like | Disagree)

acarney
Nice! Now I can try Verizon without going to a store. I wish att allowed you to add a line from the app rather then needing to visit a store!
Score: 3 Votes (Like | Disagree)

really Verizon? no one copy edits you're release notes?

Sanme
Can someone remind me why it’s not available to the X again?
Score: 3 Votes (Like | Disagree)
Read All Comments

Sunday December 5, 2021 7:55 am PST by Hartley Charlton
Apple is working on five new Macs for launch in 2022, including a new version of the entry-level MacBook Pro, according to Bloomberg's Mark Gurman. In the latest edition of his "Power On" newsletter, Gurman said that he expects Apple to launch five new Macs in 2022, including: A high-end iMac with Apple silicon to sit above the 24-inch iMac in the lineup A significant MacBook Air...
Read Full Article • 141 comments