Apple-authorized reseller B&H is offering up to $500 off select 15-inch 2018 MacBook Pro models today as part of its Cyber Monday sale, while supplies last. That's even better than its Black Friday deals on the latest MacBook Pro lineup. These are brand-new-in-box models like those sold on Apple.com. 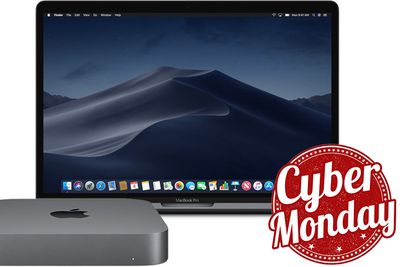 Apple authorized-reseller Expercom is also offering up to $500 off the 2018 MacBook Pro and up to $290 off a few higher-end 2018 Mac mini configurations, marking the best deal we've seen on the new Mac mini.

While most resellers are currently offering just $50 off the new Mac mini, Expercom is able to offer up to $290 off because they are configured-to-order, open-box models with Expercom-installed RAM. Expercom is an Apple Authorized Service Provider, so this doesn't affect AppleCare eligibility.

Note: These are open-box Mac mini configurations equipped with Expercom-installed RAM, not Apple RAM. Expercom is an Apple Authorized Service Provider, so this does not affect AppleCare eligibility.

Note: MacRumors is an affiliate partner with some of these vendors. When you click a link and make a purchase, we may receive a commission, which helps us keep the site running.

archer75
Thats a huge rip on the mini. They make it sound like you're getting a deal but note they installed the ram. Which is less than half of what apple is charging. Then they are jacking the base price to match apples price for the ram they installed. Then "discounted" it to a price that is still higher if you bought the same config and put the ram in yourself.
Score: 20 Votes (Like | Disagree)

magicschoolbus
And still to expensive.
Score: 15 Votes (Like | Disagree)

DrJohnnyN
Bring back the 17” Pro and then we’ll talk.
Score: 5 Votes (Like | Disagree)

zemaker
Even with discounts, these prices are insane, Apple prices are really getting out of hand.
Score: 5 Votes (Like | Disagree)

Thats a huge rip on the mini. They make it sound like you're getting a deal but note they installed the ram. Which is less than half of what apple is charging. Then they are jacking the base price to match apples price for the ram they installed. Then "discounted" it to a price that is still higher if you bought the same config and put the ram in yourself.

This is the first thing I noticed. Everyone knows Apple charges a huge premium for their pre-installed RAM. For a company to install their own off the shelf RAM, list Apple's price for that much RAM, then offer a "discount" back to the normal price for a lower end spec Mac mini + off the shelf RAM is shady to say the least. It probably works fine, but there is no actual discount.
Score: 4 Votes (Like | Disagree)

Thats a huge rip on the mini. They make it sound like you're getting a deal but note they installed the ram. Which is less than half of what apple is charging. Then they are jacking the base price to match apples price for the ram they installed. Then "discounted" it to a price that is still higher if you bought the same config and put the ram in yourself.

I haven't seen MacRumors post any real 2018 Mac mini discounts. "Up to $290 Off 2018 Mac Mini" is extremely misleading.
Score: 4 Votes (Like | Disagree)
Read All Comments