Apple today announced the launch of its new Entrepreneur Camp, which is meant to create new opportunities for app-driven businesses that are owned or led by women. 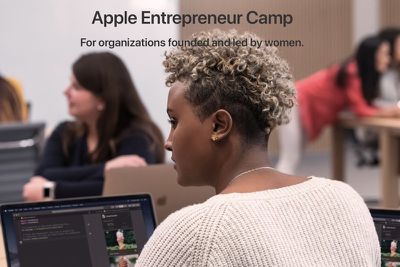 "Apple is committed to helping more women assume leadership roles across the tech sector and beyond," said Tim Cook, Apple's CEO. "We're proud to help cultivate female leadership in the app development community with the new Apple Entrepreneur Camp, and we're inspired both by the incredible work that's already happening, and what's sure to come."

Apple says that to be eligible for the program, which is now accepting applications, businesses must be female-founded, co-founded, or led and have at least one woman on the development team. A working app or prototype is required, as is a "desire to leverage Apple technologies and benefit their mission.

The inaugural session of the Entrepreneur Camp is set to begin in January 2019. Sessions will be held on a quarterly basis, with 20 app companies accepted for each round. The exception is the pilot round, which will be limited to 10 companies.

After being accepted to the program, companies will be able to send three employees to Cupertino, the home of Apple's two most well known campuses: Infinite Loop and Apple Park.

The two week immersive program is set to include one-on-one code-level assistance with Apple engineers, sessions on design, technology, and App Store marketing, access to an alumni forum for peer-to-peer mentoring, and ongoing support from Apple.

Participating companies will also receive two tickets for the following year's Worldwide Developers Conference as well as one year of free membership in the Apple Developer Program.

826317
I'm tired of seeing this gender-only, ethnic-only or whatever-only type of thing. Forced diversity is a joke. If women want to get into IT, they will. The reason there are not many women in the IT sector is because of evident natural sex differences.
Score: 78 Votes (Like | Disagree)

How does this programme discriminate? Men have never been disadvantaged for being a man in the IT industry. Ever. Programmes like this only let those who are, get a head start and even footing.

You've made several incorrect statements in these posts:
[LIST=1]
* Any form of enforced 'diversity' will discriminate against someone. Simply by making a conscious choice to favor one gender or race creates a discrimination against the other gender and all other races. You can't avoid it.
* You state men have 'never been discriminated for being a man in the IT industry' while commenting on a story that intentionally discriminates against men in the IT industry. This isn't just one example of this happening, many companies are using gender-specific hiring practices.
* People have long been permitted, and encouraged, in IT to participate at all levels and in all industries. When I left university almost 15 years ago, there were companies working hard to bring woman and minorities into IT. This is nothing new; it's only new to people who haven't been paying attention for a few decades.


According to your posts, you're ok with discrimination based on gender and/or race. That is, as long as it's discrimination that you agree with. Just admit it so we cam move on and determine if these types of programs actually do any good (which I contend they don't).
Score: 43 Votes (Like | Disagree)

Cole Slaw
Maybe Tim should step down and be replaced by a woman to show how strongly he believes in diversity.
Score: 38 Votes (Like | Disagree)

How does this programme discriminate? Men have never been disadvantaged for being a man in the IT ndustry. Ever. Programmes like this only let those who are, get a head start and even footing.

Hmmm a program for just women... how does this discriminate? A real brain teaser here...
Score: 33 Votes (Like | Disagree)

I'm tired of seeing this gender-only, ethnic-only or whatever-only type of things. Forced diversity is a joke. If women want to get into IT, they will. The reason there are not many women in the IT sector is because of evident natural sex differences.

It must be nice to have nobody tell you you can’t do a job because of who you are. It must be nice to not need programmes that only aim to help and even out decades of oppression.
Score: 32 Votes (Like | Disagree)
Read All Comments