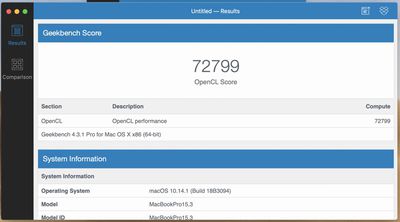 The machine, which includes a 2.6GHz Core i7 Intel processor, a Radeon Pro Vega 20 graphics card, 16GB RAM, and a 1TB SSD, earned an OpenCL score of 72799. Additional benchmarks found on Geekbench with a similar machine using an upgraded Core i9 processor demonstrated OpenCL scores of 75817, 76017, and 80002.

In a separate benchmark uploaded to Geekbench, the new high-end MacBook Pro with Core i9 processor also earned a Metal score of 73953.

Squirrelxb
Oh that's the OpenCL score, I thought it was the price.
Score: 107 Votes (Like | Disagree)

These should be direct replacements not £315 upgrades. These MacBook pros are getting so expensive its ridiculous that even a mid range option is in the £4000 region. Then add another £399 for AppleCare.

Plus once you have the CPU and these GPUs pinned the likely hood is they will perform far far less than their potential with the poor cooling so whats the point.
Score: 45 Votes (Like | Disagree)

giggles
But can the MBP with Vega replace your computer?
Score: 19 Votes (Like | Disagree)

These should be straight replacements not £400 upgrades. These MacBook pros are getting so expensive its ridiculous that even a mid range option is in the £4000 region. Then add another £399 for AppleCare.

Plus once you have the CPU and these GPUs pinned the likely hood is they will perform far far less than their potential with the poor cooling so whats the point.

oneMadRssn
Ugh! All the non-Vega MBPs purchased over the last few months are now worthless. Might as well throw them on ebay for $1 ...

Wednesday November 30, 2022 2:39 am PST by Sami Fathi
Geekbench scores allegedly for the upcoming "M2 Max" chip have surfaced online, offering a closer look at the performance levels and specific details of the forthcoming Apple silicon processor. The Geekbench results, first spotted on Twitter, are for a Mac configuration of with the M2 Max chip, a 12-core CPU, and 96GB of memory. The Mac listed has an identifier "Mac14,6," which could be...
Read Full Article • 202 comments

Wednesday November 30, 2022 10:09 am PST by Juli Clover
Apple today released iOS 16.1.2, another minor bug fix update that comes one week after the release of iOS 16.1.1 and three weeks after the launch of iOS 16.1, an update that added support for iCloud Shared Photo Library, Matter, Live Activities, and more. The iOS 16.1.2 update can be downloaded on eligible iPhones over-the-air by going to Settings > General > Software Update. According...
Read Full Article • 109 comments