Hands-On With the New 2018 MacBook Air

Apple's newly revamped 2018 MacBook Air with slimmed down bezels, Touch ID, and a thinner body launched yesterday, and we got our hands on one of the updated machines.

Check out our latest YouTube video for an unboxing and feature overview of the new notebook, which has been described as the ideal MacBook for most people.

Subscribe to the MacRumors YouTube channel for more videos.
Design wise, the MacBook Air looks a lot like the previous-generation model, but it now comes in Space Gray and Gold in addition to Silver. It's not as thin and light as the ultra thin and ultra portable MacBook, but Apple has streamlined the design.

The new MacBook Air is 10 percent thinner than the previous model, takes up 17 percent less volume, and weighs a quarter pound less at 2.75 pounds. 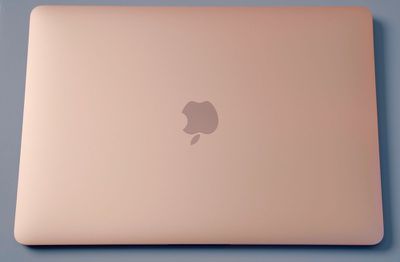 Components from the MacBook Pro, including the larger Force Touch trackpad and the third-generation butterfly keyboard, have been added to the MacBook Air, which will be major changes for anyone upgrading from an older machine that doesn't have these features.

There's been some controversy with the butterfly keyboard (which has been available in the MacBook and MacBook Pro for years) but this third-generation version has additional silicone barriers to keep crumbs out and to cut down on failure rates.

Like the new 2018 MacBook Pro models, the MacBook Air adopts a T2 chip and Touch ID for use as a password replacement, but it doesn't have a Touch Bar. It also uses USB-C/Thunderbolt 3 ports, dropping the USB-A, SD card slot, and MagSafe 2 ports.

For the first time, the MacBook Air features a Retina display, putting it on par with the MacBook Pro and the MacBook. It's not quite as bright and vibrant as the MacBook Pro's display, but it's still a fantastic improvement over the previous non-Retina model.

The display also has slimmed down black bezels, a much more modern look than the thick silver bezels from the prior-generation model.

Inside, the MacBook Air is equipped with a 7W 8th-generation Core i5 Intel processor. It's not as high-powered as the 15W chips used in previous MacBook Air models, but it does offer speed improvements over the old Broadwell chips that prior machines used, and since it uses less power, it's super efficient.

The new MacBook Air has the longest battery life out of any of Apple's notebooks, lasting up to 12 hours when browsing the web and 13 hours when watching iTunes movies.

With all of these new features, Apple is charging $1,199 for the entry-level MacBook Air with a 128GB SSD and 8GB RAM, $200 more than the base model MacBook Air used to cost. That puts it close to the pricing of both the entry-level 2017 non-Touch Bar MacBook Pro and the 12-inch Retina MacBook.

Still, the MacBook Air is Apple's lowest-priced modern notebook, and with its rich feature set, long battery life, and slimmed down enclosure, it's an appealing machine that's ideal for people who need a notebook to do things like web browsing, light creative work, writing, office work, and other similar tasks.

Did you get a new 2018 MacBook Air? Let us know what you think about the machine in the comments.

levitynyc
128GB is a total non starter for me.

Jmausmuc
I feel like the Touchbar is kind of dead at this point. If only a fraction of models have it (not even all MBPs) there is not as much incentive for developers to fully embrace it.
Score: 19 Votes (Like | Disagree)

AngerDanger
Just waiting for somebody to make the haptic trackpad vibrate enough to scoot the MacBook Air around your desk.

SandboxGeneral
I have the Space Gray version with 16GB RAM and the 512 GB SSD. I'm quite happy with the purchase so far and I've already taken it on a road trip to a distant meeting today. I took it off of the charger at about 7 am this morning and after 10.5 hours It still has 68% battery life remaining.

The keyboard is nice and it's my first time experiencing the butterfly design. The screen brightness is also good. I recognize that the nits are lower than other laptops and some aren't happy with that. But for my use case, always indoors with dim light and bright lights, the screen is just fine and I don't even have it at 100% most of the time.

I do like the force touch trackpad too. Very nice to be able to click anyplace on it verses at the the bottom.

Having Touch ID and Apple Pay on here is also very awesome.

This is all an experience in comparison to my now retired 2012 15" cMBP which weighed a ton. I love how the new MBA is so small, thin and lightweight. It makes it so much better to carry around from meeting to meeting at work.

Edit: Updated info since others are asking me about it.

So far, I've heard nothing out of this machine. That includes initial setup, then doing the macOS update it needed and installing some of my apps including Evernote and downloading all the notes from the cloud and doing the initial Time Machine backup, something like 52GB in all. I have never felt it get hot yet either. That includes using this as a true laptop. What I mean by that is, I was working on my book, browsing the web and such with the MacBook Air on my lap, with a blanket between it and my legs and it never got hot, or started to overheat or made any kind of fan noise. My old MacBook Pro would always start to overheat and spin up the fans in that situation and I ended up buying a laptop holder thing to rest it on and then rest that on my lap.

I don't do any CPU intensive tasks anymore and am more of a general, everyday typical computer user, so this MacBook Air fits my bill nicely.

Keyboard
Regarding the keyboard, this is my first experience with the butterfly design and I quite like it very much. I'm not having any more typos than I get on any other type of keyboard. In fact, I feel like I'm typing even faster on this one than my old 2012 MacBook Pro or on the Apple Wireless keyboard. I know a lot of people are unhappy with this keyboard design, but many others are equally satisfied with it.

I was even doing some work last night on my book with this machine and just typing away was effortless for me and dare I say it, enjoyable.
Score: 17 Votes (Like | Disagree)

MadDawg2020
LOL Gotta love the writer of this review - and their conclusion that the new MacBook Air is NOT as portable as the MacBook ... - Yeah that extra 1/8 of an inch thickness with an entire 1/3 of a pound extra weight just makes this new MacBook Air completely impossible for anyone to carry around. It is so heavy and difficult to handle you might as well go back and dust off your true portable machine, the Macintosh Portable, and charge up a few spare lead batteries to get a whole hour or two out of its glorious non backlit monochrome display.

yocko
I bought it and was kind of desillusioned with it. I thought the retina screen was kind of meh... I also found it kind of sluggish. It just doesn’t feel kind of (excuse me) snappy. I ran into the pizza wheel of death once or twice and I decided this morning to return it and get a 13’ iPad Pro instead.
The difference in screen is mind blowing. I use it mainly when I travel and thought I could do without the full macOS. I read watch movies and play with it. Mail I prefer to do on my phone. I type nowhere faster than on my phone.
I really got a rush of excitement when I got the iPad. And I had nothing of the sorts with the MBA.