Apple on Tuesday released iOS 12.1 following six weeks of beta testing. As mentioned in the release notes, the software update extends Apple's performance management feature to the iPhone 8, iPhone 8 Plus, and iPhone X. 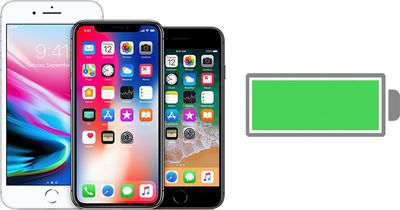 From the release notes:

Adds a performance management feature to prevent the device from unexpectedly shutting down, including the option to disable this feature if an unexpected shutdown occurs, for iPhone X, iPhone 8 and iPhone 8 Plus.

Apple has reflected this change on its iPhone Battery and Performance website, noting that performance management "may be less noticeable" on those iPhone models due to their "more advanced hardware and software design."

The performance management system was first enabled in iOS 10.2.1, but it was limited to the iPhone 6, iPhone 6 Plus, iPhone 6s, iPhone 6s Plus, iPhone SE, iPhone 7, and iPhone 7 Plus until yesterday's release of iOS 12.1.

Last December, Apple did mention that the design of the iPhone 8, iPhone 8 Plus, and iPhone X allows for a "different" performance management system that "more precisely" prevents unexpected shutdowns, but prior to iOS 12.1, no performance management feature of this kind had been enabled on the trio of iPhones:

iPhone 8 and later use a more advanced hardware and software design that provides a more accurate estimation of both power needs and the battery's power capability to maximize overall system performance. This allows a different performance management system that more precisely allows iOS to anticipate and avoid an unexpected shutdown. As a result, the impacts of performance management may be less noticeable on iPhone 8 and later. Over time, the rechargeable batteries in all iPhone models will diminish in their capacity and peak performance and will eventually need to be replaced.

Why is Apple slowing down some iPhone models if necessary?

From our January 2018 article What to Know About Apple Slowing Down iPhones to Prevent Unexpected Shutdowns:

Apple recognized that iPhones unexpectedly shutting down on users is not a good experience, and starting with iOS 10.2.1, it quietly implemented a power management feature to prevent these shutdowns. The update was released in January 2017, and a month later, Apple said it saw a major reduction in shutdowns.

The performance management feature can be disabled if desired in the Settings app, under the Battery Health menu. At this time, the feature does not appear to extend to the new iPhone XS, iPhone XS Max, or iPhone XR.

I'd be fine with it if the battery lasted more than a single year before needing it. In fairness it's probably only a small group where the battery is bad enough to need throttling but even so, for the price of the phone the batteries should have better longevity.

Blame battery tech not Apple. Apple didn't invent lithium-ion batteries. They simply chemically degrade over time due to charge and discharge cycles. No devices (not just smartphones) are immune from battery degradation. Same reason your cordless dustbuster/stick vac battery wont hold a charge after a certain amount of time; it has nothing to do with the device the battery is in but number or charge/discharge cycles.

Seems like a problem that could have been solved if Apple bothered to ship their phones with an appropriately sized battery...

Huh? What does battery capacity have to do with number recharge cycles and chemical degradation of a lithium-ion battery? ALL batteries degrade over time.


"The lithium-ion battery works on ion movement between the positive and negative electrodes. In theory such a mechanism should work forever, but cycling, elevated temperature and aging decrease the performance over time. Manufacturers take a conservative approach and specify the life of Li-ion in most consumer products as being between 300 and 500 discharge/charge cycles."

So charge cycles and ambient temperature make a HUGE difference in life of a battery. And since no one keeps their devices at 0°C (freezing point) and factoring most charge the battery to 100% each time, a 20% degradation after 1 year per the chart is proven by science. It's not simply "Apple said"
Score: 19 Votes (Like | Disagree)

NexusUser
Seems like a problem that could have been solved if Apple bothered to ship their phones with an appropriately sized battery...
Score: 16 Votes (Like | Disagree)

Why doesn’t iPad have a low power mode?.

Because the overall size of the battery plays a role in whether or not it can supply the proper voltage under certain conditions. The iPad battery does not have the same constraints as the smaller iPhone batteries.
Score: 11 Votes (Like | Disagree)

Totally fine with me. Better than a phone becoming unusable, but of course they've should've been disclosing it and allowing users to toggle it on and off from the beginning.

I'd be fine with it if the battery lasted more than a single year before needing it. In fairness it's probably only a small group where the battery is bad enough to need throttling but even so, for the price of the phone the batteries should have better longevity.
Score: 9 Votes (Like | Disagree)

Nicksd84
Totally fine with me. Better than a phone becoming unusable, but of course they've should've been disclosing it and allowing users to toggle it on and off from the beginning.
Score: 8 Votes (Like | Disagree)
Read All Comments