The new second-generation Apple Pencil that Apple introduced today alongside new iPad Pro models includes support for tap gestures and inductive charging when attached to an iPad Pro via magnets, a major upgrade from the previous model that had a built-in Lightning port.

Given all of the changes introduced in the Apple Pencil 2, it only works with the new 11 and 12.9-inch iPad Pro models and it is not compatible with older iPad Pros or the sixth-generation iPad. 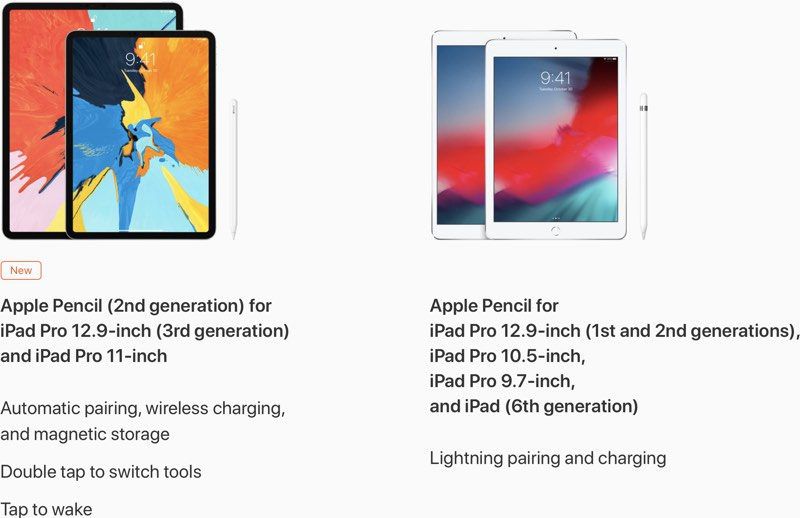 That means if you're upgrading to the new iPad Pro from an older iPad Pro model and already have an Apple Pencil, you're going to need to buy a new second-generation model if you want an Apple Pencil to use with the upgraded tablets.

The new second-generation Apple Pencil is priced at $129 and can be ordered starting today, with the accessory set to be delivered on November 7.

Apple's new Apple Pencil is $30 more expensive than the existing Apple Pencil, which is priced at just $99.

CalBoy
The new pencils are cool, but this almost feels like an intentional move to punish people who bought either product before today.

There’s a lot about Apple’s recent decisions that honestly come across as taking customers for granted.
Rating: 26 Votes

OldSchoolMacGuy
Makes sense. Older iPad owners wouldn't be able to charge the new Pencil 2 as they don't have inductive charging. And new iPads don't have Lightning to charge the older Pencil.
Rating: 12 Votes

mobilebuddha
Can you not use a lightning cable to charge Apple Pencil 1.0? If you are on-the-go, are you not carrying a lightning cable? Is inductive charging different from wireless charging that iPhones use?

These are -terrible- reasons to make the pencils not compatible with each other. Naked money grab.


Hmmm, okay... charging won't work. We agree on that. But why won't usage work? Let's say you have and use the previous and this new iPod Pro. Then this means you also need two pencils.

Think of the $$ that could be made from the adapters.


Nothing a dongle wouldn't fix in both cases. The only reason they would be incompatible is because Apple chooses not to support them.

These are -terrible- reasons to make the pencils not compatible with each other. Naked money grab.


Exactly. A simple USB to Lightning dongle would solve this problem with older Pencils.

New Pencils would be a little more difficult as they would require some sort of wireless charging dongle, and a way to trigger the wireless pairing. Doesn't seem to be rocket science in any case.
[doublepost=1540925165][/doublepost]

Hmmm, okay... charging won't work. We agree on that. But why won't usage work? Let's say you have and use the previous and this new iPod Pro. Then this means you also need two pencils.


Pairing I suspect is the problem. If the old iPad doesn't have a way to pair with the new Pencil, it doesn't matter if the rest of it otherwise works. As for why the old Pencil wouldn't pair with the new iPad? Well that seems like an intentional decision to prevent it.
Rating: 5 Votes

bilibug
I'm really disappointed with today's event. I was planning to buy a new large iPad Pro and pencil, as well as maybe a Mac Mini. Now I don't think I will get any of them, and live with my older models until they die. For one, the price gouging is a major turnoff. But more so, the Apple Pencil incompatibility screams of a company which lacks a clear product development path. The products released the last few years seem rushed. I got burned once before with my iPad 3, which was obsoleted within 6 months. As many have said, the new fragmentation is overwhelming. If the new iPads were going to have USB C, then the new phones should have had them. Other than product development in a silo, there was no valid excuse to hold back on the change of technology. And all the hot wind about the notch on the iPhone X being iconic. If that is the case, why isn't there a notch on the new iPads. If the excuse is the availability of space due to the larger bezel, then why does the iPhone XR have a notch? All signs is of a company that lacks cohesion in their design team, something that violates everything the old Apple under Jobs stood for. I miss the simplicity and uniform design of those products.
Rating: 5 Votes

KeepCalmPeople
Not surprised. No reverse or forward compatibility, and bump the price up 30%.
Apple pushing the price boundaries as usual.
Rating: 4 Votes

That is going to be an extremely small percentage of users. It's all down to compatibility.

It’s all down to taking advantage of the customer when they could easily have made the previous pencil compatible. Some people are happy with their pencils but don’t want to dish out another 120-130$ for another one on top of 800$

Or some may have bought a 10.5 iPad Pro along with a pencil in April :(
Rating: 4 Votes

It would be possible with an adapter but not a normal lighting cable by itself. The pencil has a plug not a socket.

True, but it does come with the adapter...
Rating: 4 Votes
[ Read All Comments ]