iFixit Gives Us a Peek Inside iPhone XR With New Teardown

Apple's new lower-cost flagship smartphone, the iPhone XR, launched today, and iFixit picked up one of the new devices to take it apart for one of the site's traditional teardowns that are designed to give us a peek inside Apple hardware.

An x-ray provided by Creative Electron offers a look inside the fully assembled iPhone, showing where each component is located. 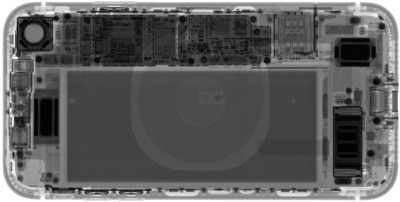 In fact, the SIM tray in the iPhone XR is modular, which is a first for an iPhone. iFixit says that this will allow for faster swapping of a dead SIM reader and a reduction in cost when replacing the logic board.

iFixit says that it's not entirely clear where the iPhone XS got its extra IP-68 water resistance from, given the fact that opening the XR and the XS is similar.

The XR is equipped with an LCD that's 0.3 inches larger across than the AMOLED display in the iPhone XS, and it's also thicker and heavier because it requires a backlight. According to iFixit, the larger display is the reason why the Lightning connector is off-axis.

iFixit gave the iPhone XR an overall repairability score of six. A broken display can easily be replaced with minimal hardware removal, says the site, but Pentalobe screws and waterproofing complicate things.

twocents
What comes to mind when I see this was the quote by Steve Jobs along the lines of how the inside of Apple products should look better than the outside that of the competitors. Happy to see that’s still true
Score: 18 Votes (Like | Disagree)

iPhones are so clean on the inside. The design is incredible.

Indeed. In retrospect, if you look at the first iPhone back in 2007, look how the sloppy assembled internals compare to how neat and organized everything is in today’s current iPhone internals:

Baymowe335
iPhones are so clean on the inside. The design is incredible.
Score: 7 Votes (Like | Disagree)

3D Touch is dead. Get over it bruh.

lec0rsaire
That’s a pretty damn big battery. As dies keep shrinking, the battery will eventually make 95% of the total volume of the phone.
[doublepost=1540586410][/doublepost]

What comes to mind when I see this was the quote by Steve Jobs along the lines of how the inside of Apple products should look better than the outside that of the competitors. Happy to see that’s still true

Even if 90% of folks will never see the guts themselves. This is the approach that manufacturers of luxury Swiss watches use as well with the movements as well as exotic car manufacturers with their engines.
Score: 5 Votes (Like | Disagree)
Read All Comments