Apple today updated its privacy website to reflect the latest measures it has implemented in iOS 12 and macOS Mojave to protect customers. 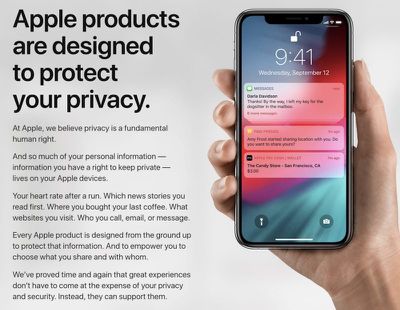 For example, the new page reflects that all apps submitted or updated on the App Store now require a privacy policy, a requirement that went into effect October 3. Apple already required a privacy policy for apps that accessed personal information, but even basic apps that do not share data must have one now.

In iOS 12 and macOS Mojave, Apple's so-called Intelligent Tracking Prevention feature has been improved. Now, when third-party tracking sites attempt to create cookies or store data, they can do so only with your explicit consent.

In macOS Mojave, Apple has made it harder for trackers to create a unique device fingerprint. Meanwhile, automatic strong passwords in Safari on iOS and macOS, which are end-to-end encrypted in iCloud Keychain, make it easier to sign in to sites without using social media logins that can facilitate user tracking.

Apple has also added protections for private data, such as requiring user consent for access to the camera and microphone on macOS Mojave.

Apple has expanded its use of end-to-end encryption to include Group FaceTime and Screen Time on iOS 12, while its use of Differential Privacy now extends to the personalized Memoji features users select to help identify popular features, such as hairstyle, so Apple can expand its choices in the future.

The updated privacy website also indicates that location data sent to nearby emergency services using RapidSOS is deleted after 24 hours.

As always, Apple believes privacy is a "fundamental human right," and aims to "minimize its collection of personal data." Apple says "the customer is not its product," and that its business model "does not depend on collecting personally identifiable information" to help targeted profiles marketed to advertisers.

Apple's privacy page has been updated a week before Apple CEO Tim Cook is set to speak at the 2018 International Conference of Data Protection and Privacy Commissioners next Wednesday, October 24 in Brussels.

DNichter
Best out there when it comes to privacy. Huge reason why I continue to buy Apple.
Score: 22 Votes (Like | Disagree)

supremedesigner
This is the main reason I continue using Apple products and services. I applaud Apple for doing their best at this.
Score: 7 Votes (Like | Disagree)

SteveJUAE
This seems more like backside covering than real protection. Get developers to write some policy even though it may never be certified or policed, but if it goes wrong Apple are covered :rolleyes:

Sounds good in principle but reality may be different IMO and maybe a false sense of security
Score: 2 Votes (Like | Disagree)

Defthand
Apple is trying to market a disadvantage (data collection and analytics) as a feature (privacy). And they're exploiting people's paranoia to keep people in the walled garden. But there's holes in that garden wall that people voluntarily allow to compromise their "privacy". Apple can't protect you from yourself when you surf the web and use outside services like Facebook.

Look, everyone wanted technology to anticipate their needs and advise them on decisions. That takes data. Compare Apple Maps to Google Maps. Following is Apple's data about a diner. Not much better than an ancient Yellow Pages ad.

(Below) Look what's achievable when you allow a service like Google to aggregate people's public habits. In addition to Apple's tech-less information, Google can suggest what time to visit. That is useful information.

m0sher
I like apples privacy protecting their customers from third-party tracking sites so they can do so only with your explicit consent.

There’s been a lot of shifty apps gathering information lately without our knowledge.

Apple is trying to market a disadvantage (data collection and analytics) as a feature (privacy). And they're exploiting people's paranoia to keep people in the walled garden. But there's holes in that garden wall that people voluntarily allow to compromise their "privacy". Apple can't protect you from yourself when you surf the web and use outside services like Facebook.

Look, everyone wanted technology to anticipate their needs and advise them on decisions. That takes data. Compare Apple Maps to Google Maps. Following is Apple's data about a diner. Not much better than an ancient Yellow Pages ad.

(Below) Look what's achievable when you allow a service like Google to aggregate people's public habits. In addition to Apple's tech-less information, Google can suggest what time to visit. That is useful information.

Thank you for the comparison. I agree there are benefits to sharing data as you have demonstrated. It really comes down to "what else" are / could a company like Google be doing with my data? In other words, if I trust them to ONLY use my data for purposes like your example, I would not mind sharing my data with them. However, they routinely go beyond those uses for marketing purposes and potentially for even less noble purposes. It is a trade off between privacy and convenience and I still lean toward privacy.
[doublepost=1539794207][/doublepost]

Web browsing privacy on the device itself is a fallacy; if the authorities want to know what you've been looking at they will simply subpoena the network carrier/ISP who have the IP address of everything you’ve ever done with your device.

Unless you are using an offshore VPN that does not maintain logs of activity.
Score: 2 Votes (Like | Disagree)
Read All Comments