eSIM Functionality Available in iOS 12.1, But Carrier Support is Required

Apple's iOS 12.1 beta introduces support for the eSIM, aka a digital SIM that lets you activate a cellular plan from your carrier without needing to use a physical SIM card. In the iPhone XS, XS Max, and XR, the eSIM pairs with the included nano-SIM to enable dual-SIM functionality.

The eSIM in the new iPhone XS and XS Max was not available at launch, with Apple promising to activate it in a later update, which appears to be iOS 12.1. 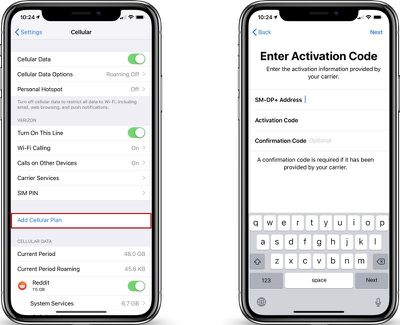 eSIM settings are available by going to the Cellular section of the Settings app and choosing "Add Cellular Plan," which is the method used to add another cellular provider via the eSIM.

All contacts in the Contacts app also now list a "default [P] Primary" setting in iOS 12.1 which lets you change the default phone number that you contact each person with if you have multiple phone numbers.

According to German site iPhone-Ticker.de, some Deutsche Telekom users are able to use the eSIM feature in iOS 12.1 to add two SIMs to their iPhones. Carriers need to implement the eSIM feature before it will work, and Apple offers a list of carriers that plan to offer the eSIM it in a support document.

In the United States, AT&T, T-Mobile, and Verizon plan to offer eSIM support, but the carriers likely won't roll out the feature until iOS 12.1 launches to the public.

Dual-SIM support with the eSIM is useful for people who use two cellular plans at once, such as for home or work, and it is also beneficial when traveling.

As Apple outlines on its website, both numbers used with a dual-SIM iPhone can make and receive voice calls and SMS/MMS messages, but an iPhone can only use one cellular data network at a time. That means if one number is on a call, a call to the other number will go to voicemail.

Both networks are active at once, however, and with dual-SIM enabled, you will see two carrier signal readings in the Control Center.

eSIM support will be available to everyone with an iPhone XS, XS Max (and future XR) when the iOS 12.1 update launches to the public. We've only had one beta of iOS 12.1 so far, so there is still a ways to go.

The iOS 12.1 update also includes support for Group FaceTime for up to 32 people, a new real-time Depth Control slider that can be used when taking Portrait Mode photos, and, with watchOS 5.1, new color watch face options in the Apple Watch app.

There can be multiple email addresses, but only be one number.

This is not true. I have 2 phones on the same iCloud account and both have iMessage enabled. I can get iMessages to my UK# on my US phone and vice versa.
Score: 8 Votes (Like | Disagree)

It's important to note that as of today the iMessage\Facetime platform only allows you to support one phone number. But with Dual Sim in place there is no reason that they could not change this. You can already support several email address's, I would not be surprised to see them add support for 2 phone numbers.

Not true. iMessage supports multiple phone numbers. Simply sign in to the same iCloud account on multiple phones and all the numbers will be usable in iMessage on all phones signed in.
Score: 8 Votes (Like | Disagree)

MrGimper
Need to provide feedback to Apple that the text under "Enter Activation Code" is badly aligned.....
Score: 8 Votes (Like | Disagree)

avanpelt
It will be interesting to see if AT&T locks the eSIM to their network when you choose to activate it with them like they did with the iPad Pro eSIM.
Score: 7 Votes (Like | Disagree)

cmwade77
All things old are new again, remember old CDMA phones that didn't have SIM cards? This is essentially the same thing with a new name.
Score: 6 Votes (Like | Disagree)

TrulsZK
In comparison to have to iPhones, the main issue for me is that you can not use both SIM cards for iMessage and FaceTime
Today I frequently send iMessages from both iPhones so only being able to send iMessages from one number is a big problem for me

Also for me both iPhones have different apps, email+calendar accounts, contacts, etc
They work independently from each other with no shared/synced data between the iPhones (other than iMessage communication for file transfer).
For this to work properly for me the iPhone should have multiple accounts, similar to accounts on Mac
Score: 5 Votes (Like | Disagree)
Read All Comments