VMware has released Fusion 11, the latest version of its virtualization software, with full support for macOS Mojave and the latest Mac hardware, including the 18-core iMac Pro and the 2018 MacBook Pro with a six-core Intel Core i9. 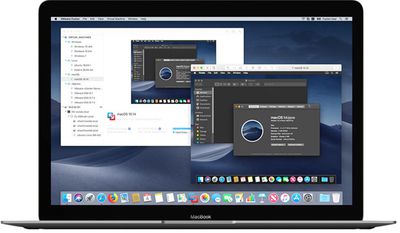 VMware Fusion, like rival software Parallels Desktop, can run hundreds of operating systems, ranging from the latest Windows 10 versions to Linux distributions like Ubuntu, directly on the desktop of a Mac.

VMware says Fusion 11 delivers many new features and platform enhancements, including an updated user interface. A new Application Menu allows users to quickly switch between virtual machines, or create a new one; change view modes, settings, and snapshots; or launch Windows apps with a single click.

There are also many under-the-hood performance improvements, particularly with Virtual NVMe devices. Users can change their virtual disk type to NVMe to increase performance on Macs equipped with SSD storage. Meanwhile, security fixes and architectural changes have been made to mitigate threats like Spectre and Meltdown.

VMware details other new features, including a new Finder integration at the top of the VM Window, on its website.

acgmph
Disappointed to see VMWare is going the same route as Parallels and releasing a new paid upgrade every year. Part of my reason to switch was the precise lack of nickel and dime-ing. Guess I’ll switch to Virtual Box now. Good riddance...
Score: 16 Votes (Like | Disagree)

Disappointed to see VMWare is going the same route as Parallels and releasing a new paid upgrade every year. Part of my reason to switch was the precise lack of nickel and dime-ing. Guess I’ll switch to Virtual Box now. Good riddance...

Erm, it's a paid upgrade per major release, which may happen every year. The old version still works, you don't have to upgrade. Just because Apple moved to give OS updates for free, doesn't mean every software house has to become a charity too.
Score: 11 Votes (Like | Disagree)

Erm, it's a paid upgrade per major release, which may happen every year. The old version still works, you don't have to upgrade. Just because Apple moved to give OS updates for free, doesn't mean every software house has to become a charity too.

There is no problem with paid upgrades. But if you read the post you quoted again the complaint is that VMWare moved from a 2 or 3 years paying upgrade cycle to a yearly one, making it quite a lot more expensive than it used to be to always stay up to date.

Of course they are free to make that choice, but their customers are also free to be dissatisfied with it and move away from VMWare which has lost one of its competitive advantages.
Score: 10 Votes (Like | Disagree)

Disappointed to see VMWare is going the same route as Parallels and releasing a new paid upgrade every year. Part of my reason to switch was the precise lack of nickel and dime-ing. Guess I’ll switch to Virtual Box now. Good riddance...

HOW DARE THEY OFFER SIGNIFICANT UPDATES WHICH REQUIRE TONS OF WORK AND RESOURCES AND EXPECT TO BE PAID FOR IT!

I'm sure you work for free at your job.
Score: 7 Votes (Like | Disagree)

shareef777
Reading complaints about being a paid upgrade and comparing it to Parallels doesn't make sense. There's a MAJOR difference between VMware and Parallels. VMware continues to work with every OS update while Parallels stops working EVERY YEAR. I'm happy with VMware and upgrade every couple years for $50. So that's $25 a year they get from me, vs Parallels which gets NOTHING.
Score: 6 Votes (Like | Disagree)

Crash0veride
Tip: Wait a month for resold licenses to hit eBay and pick up a five dollar pro version. Worked well for the last year for me on 10 Pro.
Score: 5 Votes (Like | Disagree)
Read All Comments