Apple today seeded the first beta of an upcoming iOS 12.1 update to developers, just one day after releasing iOS 12, a major new version of the iOS software. 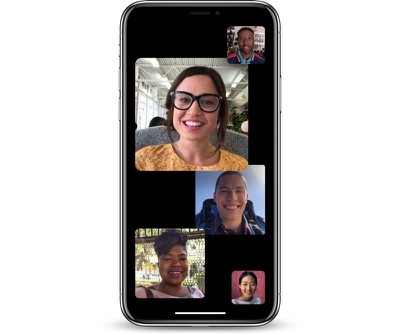 It's not clear what features might be included in the iOS 12.1 beta, but Apple removed the Group FaceTime feature from iOS 12 ahead of its launch and promised to introduce it in a future update, which could be iOS 12.1.

The update may also feature new emoji that are said to be in the works and coming in an iOS 12 update later this year.

We'll update this post with details on the new features that are included in iOS 12.1 once we've downloaded the software and have had time to check it out. Apple today also released a new beta version of Xcode, Xcode 10.1.

Update: The iOS 12.1 beta reintroduces support for Group FaceTime, a feature that was removed from iOS 12 ahead of its release. Apple needed more time to test Group FaceTime and said that it would be coming in a software update later this fall. Group FaceTime is designed to let you audio or video chat with up to 32 people at one time.

Enclavean
Every year after the GM is out i remove my beta profile and tell myself im not installing betas anymore and every year i just end up on betas all year lol
Score: 24 Votes (Like | Disagree)

ck2875
For those receiving a new phone or watch on Friday, you may want to wait until you receive your new device if you want to restore from a backup. You won't be able to restore a backup from iOS 12.1 or watchOS 5.1 to a device on iOS 12 or watchOS 5. If you update your current device now, you'll have to set up the new devices on Friday as a new device, install the beta profiles, update, reset the device, and then restore from a backup.
Score: 23 Votes (Like | Disagree)

Do we need a new profile for this?

for a 12.1 its terrible how only one new feature nothing seems new

Because Tim Cook hates you on a personal level.
Score: 7 Votes (Like | Disagree)

MrGimper
Must. Wait. Til. Friday.
Score: 7 Votes (Like | Disagree)

They wasted no time, lol

This is normal for software development. It's not linear.

There are several "develop" branches that co-exist in parallel. Only once a branch reaches a certain stability and completeness does it gets released, but already several other branches have moved forward, and then those changes get folded in when they are ready. Quite often different teams are assigned to different branches. Some branches might be for new features, some might be bug fixes. Software development is not just "one thing", "one project", but many projects that are being coordinated together. That's why Apple was able to create a build of iOS 12 without Group FaceTime, because it's being developed in its own branch and can be included or excluded, as needed.
Score: 6 Votes (Like | Disagree)
Read All Comments

Friday June 18, 2021 9:41 am PDT by Sami Fathi
After a long wait, YouTube for iOS is officially gaining picture-in-picture support, allowing all users, non-premium and premium subscribers, to close the YouTube app and continue watching their video in a small pop-up window. In a statement to MacRumors, YouTube says that picture-in-picture is currently rolling out to all premium subscribers on iOS and that a larger rollout to all US iOS...
Read Full Article • 170 comments

Saturday June 19, 2021 6:00 am PDT by MacRumors Staff
The Apple news cycle started to move beyond WWDC this week, but that doesn't mean there still wasn't a lot to talk about, led by the official debut of the much-leaked Beats Studio Buds that might give us a hint of what to expect for the second-generation AirPods Pro. With no hardware announcements at WWDC, we also took a look at when we might finally see the long-rumored redesigned MacBook...
Read Full Article • 10 comments

Friday June 18, 2021 9:16 am PDT by Joe Rossignol
Apple this week stopped selling its Magic Keyboard with Numeric Keypad, Magic Mouse 2, and Magic Trackpad 2 accessories for the Mac in a Space Gray color, around three months after discontinuing the iMac Pro, which also came in Space Gray. Last month, Apple listed the Space Gray accessories as available while supplies last, and the company has now removed the product pages from its website...
Read Full Article • 121 comments

Friday June 18, 2021 6:59 am PDT by Sami Fathi
Apple supplier TSMC is preparing to produce 3nm chips in the second half of 2022, and in the coming months, the supplier will begin production of 4nm chips, according to a new report from DigiTimes. Apple had previously booked the initial capacity of TSMC's 4nm chip production for future Macs and more recently ordered TSMC to begin production of the A15 chip for the upcoming iPhone 13,...
Read Full Article • 141 comments