In addition to hands-on time with the iPhone XS and iPhone XS Max, members of the media today got the chance to see the new LCD iPhone XR up close. This is Apple's cheaper alternative to the higher-tier XS models, with the XR starting at $749 in 64GB and rising from there. 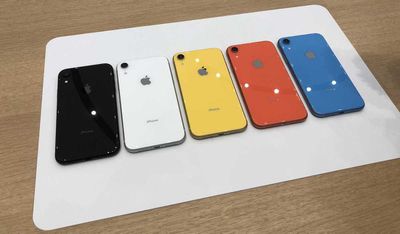 In person, The Verge said that the six new colors of the iPhone XR are all very vibrant, and the site particularly liked Coral and (PRODUCT)Red. Additionally, The Verge described the iPhone XR as noticeably lighter in comparison to the XS, and ultimately said that the XR will likely become the "default" iPhone for many users this holiday season.

I just spent a few moments playing with the new iPhone XR, which feels like it will be the default iPhone for many people this season. Not only does it have a very similar design to the more expensive iPhone XS model, it has many of the same features for a considerably lower price.

The iPhone XR comes in six different colors, including very nice-looking coral and blue options. The colors are extremely vibrant in person; the coral and red, in particular, are terrific. (They’re honestly a reason to get the XR over the XS if you don’t care about the other features like dual cameras and 3D Touch.)

In terms of downgrades from the iPhone XS to make the XR cheaper, Apple went for an LCD display instead of OLED, chose a single-lens rear facing camera instead of the dual lens on the XS, and removed 3D Touch. TechCrunch, like many outlets, said that if you don't miss these features then it's easy to see why the XR will be enticing, particularly if you want more color options.

Other than those differences, the iPhone XR has an A12 Bionic chip, a TrueDepth camera system, and Face ID -- just like the iPhone XS.

For most users, I suspect most of these elements won’t really be missed — unless, of course, you’ve already gotten comfortable with the iPhone X. While $749 is hardly “cheap” by the standards of mid-range handsets in 2018, it’s a pretty good entry-level price for an Apple handset. Also, don’t underestimate the importance of colors choices in the phone-buying process.

The XR feels like less of an afterthought, unlike the iPhone 8, which was hugely overshadowed by the iPhone X released alongside it. It looks and feels enough like the premium handset that, when coupled with the $250 price drop, it seems inevitable that Apple will sell a ton of the damn things.

Mashable reported that the rear camera on the iPhone XR is still impressive, despite the fact that it's not a true Portrait Mode effect like those produced by the dual cameras on iPhone XS or XS Max.

Noticeably impressive is the camera. It's got just a single rear camera (there's no 2x telephoto lens), but it's still stunning. The Steve Jobs Theater hands-on area was relatively well-lit, so it's hard to say how well the camera performs IRL, but that adjustable bokeh effect for portrait photos looks sick. Not so great: the even larger camera bump. The thing is massive.

A couple of minutes is obviously not enough time to get to know the iPhone XR, but at first blush, it looks like a winner. The colors will suck you right in. I'd totally buy the yellow one.

The iPhone XR will go up for pre-order this Friday, October 19, ahead of a launch one week later on October 26.

BootsWalking
Removed 3D Touch in a $750 phone? Apple, if you're going to bend your customers over at least buy them flowers first.
Score: 28 Votes (Like | Disagree)

brofkand
We will never get a flush backed phone again. Sad.
Score: 14 Votes (Like | Disagree)

Sam_S
Would be nice if they started with 128GB as standard.
Score: 13 Votes (Like | Disagree)

Looks cheaper than a $50 Huawei.

Wrong. Xr looks like a deco piece of POP ART. It's almost as if the XR design team decided to think different. Steve would have approved.

EDIT: Full disclosure I will be buying the XS, but why oh why can't we get a colorful flagship? The gold is pretty but looks like every other smartphone people carry around. The XR is different, true to Apple's roots, in the best way possible.
Score: 7 Votes (Like | Disagree)

krause734
If you want the flyest honeys, you have to have the XS Max!
Score: 7 Votes (Like | Disagree)
Read All Comments