Ahead of the 2018 International Broadcasting Convention that kicks off later this week, Adobe today shared details on updates that are coming to Premiere Pro, After Effects, Character Animator, and Audition. 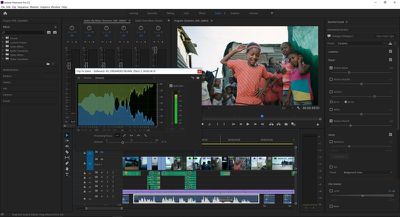 Other new features include support for Google VR 180, Spatial Markers for easier editing of VR content, and a Theatre Mode for working within the Adobe Immersive Environment. Performance improvements have also been included, with hardware-based encoding and decoding for H.264 and HEVC along with improved image processing.

After Effects, used by designers to create motion graphics, is gaining simplified authoring for streamlined content editing, font controls for quickly changing fonts, new selective color grading tools for Lumetri Color, and new in-app learning tools for those who are new to After Effects.

There's a new native Mocha plug-in for After Effects, along with end-to-end support for VR 180, H.264 and HEVC video support on macOS, and performance and GPU optimizations to improve effects like Fill, Curves, Exposure, and Noise.

Character Animator is gaining the Characterizer, a feature first unveiled at Adobe Max. Characterizer lets users import art and then record words and facial expressions to generate a new, unique character, automatically creating a puppet in just a few seconds.

Character Animator is also getting Replays for reusing facial expressions and signature moves, Magnets for letting puppets interact with objects, improved walk behavior, and a squashiness parameter for the physics behaviors.

Full details on all of the new features coming to Adobe's Premiere Pro, After Effects, Character Animator, and Audition software can be found on Adobe's website.

Adobe plans to roll out these Creative Cloud updates later in 2018.

Random thought I just had: the Pixelmator app is an interesting competitor to Photoshop. I wonder what the Pixelmator team would do with a video app? Just curious.

Pixelmator is a fantastic app - Pixelmator Pro as well - but Photoshop is still way ahead feature-wise. The way Creative Suite app work together here is king, and there just isn't a non-Adobe alternative that measures up. Affinity, even, is great, but it's not the Creative Suite.
Score: 5 Votes (Like | Disagree)

bhodinut
Adobe removed multi-core support from After Effects back in CS6 and hasn't replaced it with a "better" version. I'm getting tired of waiting.
Score: 4 Votes (Like | Disagree)

JosephAW
Adobe lost me when they went to a subscription model.
Older versions are still working great even on PPC hardware using droplets.
Score: 1 Votes (Like | Disagree)

ChrisMoBro
I’d rather they just brought back multicore processing to After Effects. Instead, we get GPU accelerated functionality added to the Fill effect
Score: 1 Votes (Like | Disagree)

martyjmclean
Adobe need less of this and more getting rid of the subscription and re-engineering their entire line from the ground up. Adobe will never beat Avid as the industry standard when they’re overcharging for buggy and inconsistent software that has no backwards compatibility.
Score: 1 Votes (Like | Disagree)

baryon
The problem is that with every update, you run the risk of Premiere gaining new bugs and instability issues. So if you happen to be running a version of Premiere which happens to be stable enough for you, chances are you will want to avoid updating for as long as possible. I have lost days trying to reinstall old versions of Premiere and trying to figure out why it isn't working because I installed a new version that turned out to be buggy. I have learnt to follow this simple rule: never update unless your current version isn't working.
[doublepost=1536777354][/doublepost]

That is the correct spelling actually. "Premiere". It's a real English word, which comes from the French word, "Première". It means "the first showing of a film."
Score: 1 Votes (Like | Disagree)
Read All Comments