Customers who live in areas where the service is rolling out can place an online order for Verizon 5G Home starting on Thursday, September 13 at 8:00 a.m. Eastern Time using the FirstOn5G website. 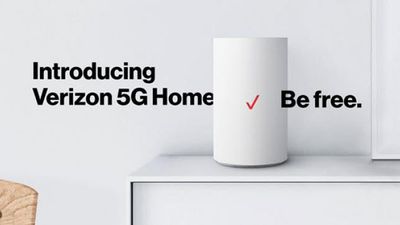 Verizon previously said that it would be offering customers who sign up for its internet service a free Apple TV 4K in lieu of a traditional cable box.

Verizon 5G Home is built on Verizon's Ultra Wideband 5G network, and it is the first commercial 5G service to launch in the United States. Verizon is also hoping to be the first mobile provider to offer 5G service, but that's still a ways off.

Verizon says that 5G Home customers will see typical network speeds of around 300Mb/s and depending on location, peak speeds of nearly 1 Gig. There are no data caps.

After the initial rollout to Houston, Indianapolis, Los Angeles, and Sacramento, Verizon plans to rapidly expand its coverage area.

OldSchoolMacGuy
Still pretty limited in terms of coverage areas, even within the cities they're offering it.

And you can bet a data cap will be coming once they get the initial customers onboard.
Score: 14 Votes (Like | Disagree)

HobeSoundDarryl
Is "no caps" here like "unlimited*" cellular service? For instance, no caps but after 20GB, we'll throttle you down towards dialup speeds... unless you pay the "heavy bandwidth user" fee.

We all know how things go with Verizon, AT&T, Comcast and similar. The bait always looks delicious. But where's the hook(s)? We know they are there but some will pretend to not know... or maybe not actually know until they are in the boat, filleted, and laid out on a platter.

-BigMac-
I am confused. Marketed as 5G, but no 5G network to make use of it in USA.

How does this work? You get an internet box?

Not a "box". Look at the picture. It's a cylinder.
Score: 8 Votes (Like | Disagree)
Read All Comments