7-Eleven today announced that Apple Pay and Google Pay are accepted at nearly all of its 10,000+ locations across the United States, following a rollout that began in August.

While many 7-Eleven retail locations have already started accepting Apple Pay, the rollout will continue throughout the month of September until "most U.S. stores" support the payments service. 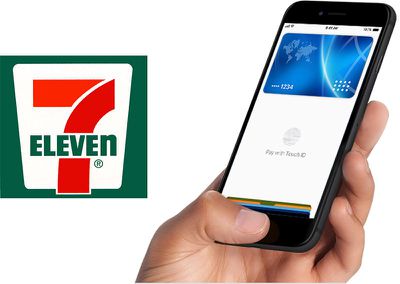 "The ability to pay with their smart device gives consumers one more reason to shop at 7-Eleven," said 7-Eleven CDO and CIO Gurmeet Singh of the Apple Pay launch.

7-Eleven also highlighted some of the technology improvements that it has introduced recently, including the 7-Eleven NOW app for placing on-demand orders with Apple Pay as a payment option, the 7Rewards loyalty program that allows customers to earn points for purchases, and the 7-Eleven Bot on Facebook Messenger to allow customers to get quick answers to questions.

Apple CEO Tim Cook first announced in July that Apple Pay support would be coming to 7-11 retail locations in the United States, and the wide availability of Apple Pay at 7-Eleven comes just in time for the launch of Apple's new 2018 iPhones.

Along with 7-Eleven, popular drugstore chain CVS, once an Apple Pay holdout, is also expected to begin accepting the payments service this fall.

Because I totally make buying decisions based on whether the store offers Apple Pay..

Sweet, me too! It makes purchasing things difficult when you don’t carry your wallet around any more.
Score: 26 Votes (Like | Disagree)

Braderunner
I LOVE businesses that take Apple Pay. It definitely influences where I spend my money.
Score: 24 Votes (Like | Disagree)

Because I totally make buying decisions based on whether the store offers Apple Pay..

Hmmm...sarcasm or honesty? I think former. :) If so, I agree. It's just as easy to grab a CC and do the transaction that way.

The only place I would REALLY love to use AP is at gas stations (at the pump), where CC info is ripped off daily from card scammers. But, I've yet to see a pump that takes AP.
Score: 12 Votes (Like | Disagree)

Too bad Apple can't figure out a way to create a bridge for payments for companies like Walmart. That way you could use Apple Pay at any retailer.

Walmart is trying to capture the value in a card transaction, that’s why it made its own bastard orphan system.
Score: 9 Votes (Like | Disagree)

-BigMac-
Because I totally make buying decisions based on whether the store offers Apple Pay..
Score: 7 Votes (Like | Disagree)

Saturday February 4, 2023 10:05 am PST by Eric Slivka
Online retailer TigerDirect has slashed pricing on the M1 iPad Air in several colors, offering the base 64GB configuration for just $313.99 in Purple and Pink. Note: MacRumors is an affiliate partner with TigerDirect. When you click a link and make a purchase, we may receive a small payment, which helps us keep the site running. That's a savings of 48% compared to Apple's normal $599.00...
Read Full Article • 435 comments

Saturday February 4, 2023 1:30 am PST by Hartley Charlton
Google's Chromium developers are working on an experimental web browser for iOS that would break Apple's browser engine restrictions, The Register reports. The experimental browser, which is being actively pursued by developers, uses Google's Blink engine. Yet if Google attempted to release it on the App Store, it would not pass Apple's App Review process. Apple's App Store rules dictate...
Read Full Article • 262 comments