The Charge Stream Vent Mount ($69.95) is designed to fit in most vehicles with a four-prong mount that slips over the air vent. It's meant to accommodate one-handed smartphone insertion and removal, and should work with most smartphones regardless of size. Rubberized arms hold a device in place while charging, and for iPhones, it supports faster 7.5W charging speeds. 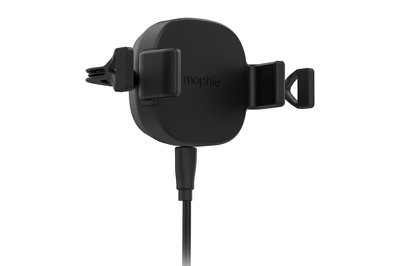 Mophie's new Charge Stream Desk Stand ($69.95) , which is coming this fall, looks similar to its existing charging pad for iPhones. It offers 7.5W charging speeds while holding an iPhone or other smartphone upright in portrait or landscape mode. The charging pad can be removed from its steel frame and used as a traditional wireless charging pad if desired.

With the exception of the Desk Stand, which is not yet available, all of the new wireless charging options can be purchased from the Mophie website starting today.

bigjnyc
I threw up in my mouth a little with that stand design. Why is the power cable on the top? So much design fail in one product
Score: 12 Votes (Like | Disagree)

Yeah this design is atrocious!! Heaven forbid any of their product designers from working at Apple!

Rojaaemon
Heh. Please, somebody create a graphic of a classic iMac with the big plug coming out of the top.
Score: 3 Votes (Like | Disagree)

syntax
And yet still no battery case for the iPhone X.
Score: 3 Votes (Like | Disagree)

gigapocket1
I don’t get mophie.. I’ve bet. Waiting for a battery case for my x for 10 months now.. it doesn’t take that long to design a case.
Score: 2 Votes (Like | Disagree)

I threw up in my mouth a little with that stand design. Why is the power cable on the top? So much design fail in one product

Yeah this design is atrocious!! Heaven forbid any of their product designers from working at Apple!
Score: 2 Votes (Like | Disagree)
Read All Comments