Intel this afternoon officially debuted its new eighth-generation U-series "Whiskey Lake" and Y-series "Amber Lake" chips, which are designed for use in thin, light notebooks like the MacBook and the MacBook Air.

The new "Amber Lake" Y-series processors, which include the i7-8500Y, i5-8200Y, and the m3-8100Y, are successors to the current chips that Apple uses in the 12-inch MacBook lineup. Apple is working on updated 12-inch MacBook models set to come out this fall that could use the new Amber Lake processors.


Intel's new 15W U-series "Whiskey Lake" chips, which include the i7-8565U, i5-8265U, and i3-8145U, would be appropriate for a refreshed MacBook Air, and rumors have suggested that such a machine is perhaps in the works.

While details haven't been entirely clear, Apple is working on a followup to the MacBook Air that features a 13-inch Retina display, and if this machine uses chips similar to the chips that MacBook Air models have used for years, the new Whiskey Lake chips are suitable.

According to Intel, its new Whiskey Lake and Amber Lake chips "raise the bar for connectivity, performance, entertainment, and productivity." The U-series chips introduce support for integrated Gigabit Wi-Fi for up to 12-times faster connectivity speeds, support for USB 3.1 Gen 2 transfer speeds, and built-in support for voice services like Alexa and Cortana. 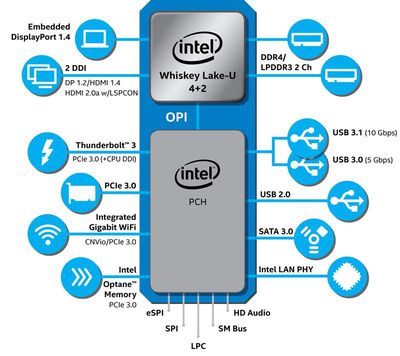 The high-end Intel Core i7 8565U processor enables Intel Thermal Velocity Boost for additional single core performance, while all the U-series chips offer 16 PCIe lanes, up from 12.

Using these new chips, 2 in 1 machines can last up to 16 hours on a single charge, while power optimized systems can last as long as 19 hours. Intel says "many systems" using the U-series chips will offer over 10 hours of battery life.

Intel says that laptops and 2 in 1s powered by the new chips will be available starting this fall.

shareef777
"compared to a 5-year-old PC". Why would you compare a new system to one from 5 years ago!? Shouldn't it be compared to the processors it's replacing?

Compared to the laptops that were available when I was in high school, my current MBP is a million times faster!
Score: 44 Votes (Like | Disagree)

You gotta love Intel's naming scheme for their CPUs.

Here's our new architecture - we're going to shoot for the sky! Lets call it Sky Lake.

Uh, oh, our 10nm shrink is delayed - the boss is getting crabby. Lets call a minor revision Kaby Lake.

Oh no - 10nm isn't working - bring on the coffee so everyone can work 80 hour weeks. Lets "rearrange the deck chairs" and call it Coffee Lake.

DeepIn2U
Intel really needs to re-think their marketing. A girl in University or a lecture room is gaming when she should be focused on the work/lecture at hand? This is a reason to upgrade?
Score: 19 Votes (Like | Disagree)

WTF Intel? This is pathetic.
Score: 17 Votes (Like | Disagree)
Read All Comments