DJI today introduced the Mavic 2 Pro and the Mavic 2 Zoom, two drones that are followups to the popular 2016 Mavic Pro.

Both of the two new drones feature an upgraded design that incorporates cameras with DJI's latest three-axis gimbal technology for smooth, stable footage. The drones also feature the same convenient, foldable design that was first introduced with the Mavic Pro.


The body of the Mavic 2 Pro and Mavic 2 Zoom has a refined chassis with low-noise propellers, allowing for a smoother, quieter flight, and both support up to 31 minutes of flight time. The two drones can reach maximum speeds of 72 KPH in Sport Mode. 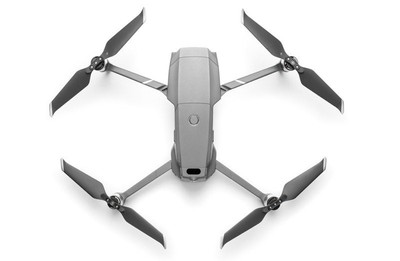 For the first time, the drones include obstacle sensors on all sides of the aircraft, which transmit data to a more powerful central processor for better obstacle avoidance. There are also new auxiliary lights at the bottom to assist the downward sensors in low-light conditions.

The Mavic 2 Pro, priced at $1,449, includes a 20-megapixel L1D-20c camera from Hasselblad, which includes Hasselblad's Natural Color Solution technology for detailed aerial shots with rich colors. The camera features an adjustable f2.8-11 aperture lens, and uses a 1-inch sensor that's the same size as the sensor in the Phantom 4. It also features support for a 10-bit Dlog-M color profile for better dynamic range.

DJI's Mavic 2 Zoom, priced at $1,249, focuses on flexibility with a 12-megapixel 2x optical lens (24-48mm) with a 1/2.3-inch sensor. A dolly zoom feature is included for "an otherworldly warped perspective."


A new Ocusync 2.0 Digital Video Transmission System offers a 1080p transmission signal up to eight kilometers for editing full HD footage directly on a mobile device, and there's an included controller that works with a smartphone.

The Mavic 2 Pro and Mavic 2 Zoom can be purchased from the DJI website starting today for $1,249 (Zoom) and $1,449 (Pro), with DJI Googles also available for an additional fee.

Note: MacRumors is an affiliate partner with DJI. When you click a link and make a purchase, we may receive a small payment, which helps us keep the site running.

It would be very wise for anyone considering buying any drone to research the local and federal laws governing their use. In the USA at least, they're pretty much illegal to fly just about anywhere (you'd want to use it).
And if you do fly it to illegally, you can't upload the video to YouTube. The Feds are on to that and track people down & bust em. Do your research before buying a drone.

It’s a little disappointing, but not that bad. For recreational flying:

1) you must register it with the FAA for $5. Rules about keeping it in your line of sight and not flying over people and not being drunk and staying under 400’ are there

2) Within 5 miles of an airport, notify them before flying

3) fly it, but stay away from in-session schools, stadiums, national parks, and some specific major infrastructure

I fly in my neighborhood, rails-to-trails areas, school and other unoccupied fields (Sundays), and the local watershed without any issues.
Score: 5 Votes (Like | Disagree)

maerz001
Ok nice product but what’s the Mac rumor here? Cos you can watch the videos later on one?
Score: 4 Votes (Like | Disagree)

now i see it
It would be very wise for anyone considering buying any drone to research the local and federal laws governing their use. In the USA at least, they're pretty much illegal to fly just about anywhere (you'd want to use it).
And if you do fly it illegally, you can't upload the video to YouTube. The Feds are on to that and track people down & bust em. Do your research before buying a drone (or not buying one).
Score: 4 Votes (Like | Disagree)

macduke
I bought my first drone a few weeks ago. It is just a little $25 drone with no camera on Amazon, but even such a cheap device was incredibly fun to fly and came with more features than one would expect. I fear that I made a huge mistake purchasing this drone because now I really want to upgrade to a bigger, fancier one. Maybe in a year or two! I'm hooked.
Score: 4 Votes (Like | Disagree)

Ok nice product but what’s the Mac rumor here? Cos you can watch the videos later on one?

It would be very wise for anyone considering buying any drone to research the local and federal laws governing their use. In the USA at least, they're pretty much illegal to fly just about anywhere (you'd want to use it).
And if you do fly it illegally, you can't upload the video to YouTube. The Feds are on to that and track people down & bust em. Do your research before buying a drone (or not buying one).

Although I agree that everyone should read and understand the laws where they are, the statement saying they're pretty much illegal to fly just about anywhere is completely false. I am an FAA certified commercial drone pilot, and there are tons of places you can fly. Remember, airspace is regulated by the FAA. Technically, cities can't restrict airspace, although they can say it's illegal to take off from their city, which makes it a bit hard to fly ;).
[doublepost=1535050848][/doublepost]

Like you said for recreational flying, but most people want to take videos and the drone restrictions just do not make it worth purchasing anymore. Go Pro was smart for getting out of the market before it tanks here in the U.S. since you can't even get permission to fly in most of the places people want.

GoPro got out of the market because they failed at producing a good drone. The Karma was literally falling out of the sky and just sucked as a drone.

Wednesday July 8, 2020 9:35 am PDT by Joe Rossignol
Despite multiple reports indicating that Apple will not include EarPods or a wall charger with iPhone 12 models this year, one analyst believes that pricing will still increase slightly compared to the iPhone 11 lineup. In a research note provided to MacRumors, analyst Jeff Pu forecasted that iPhone 12 pricing will start at $749 for a new 5.4-inch model, an increase of $50 over the base...
Read Full Article • 229 comments