Popular iPhone trivia game HQ Trivia has expanded to the Apple TV as of today, the company announced on Twitter.

The new Apple TV version of the app allows Apple TV owners to play the twice-daily trivia game on the big screen, which is ideal for playing in a group. Games take place at 3:00 p.m. ET and 9:00 p.m. ET. 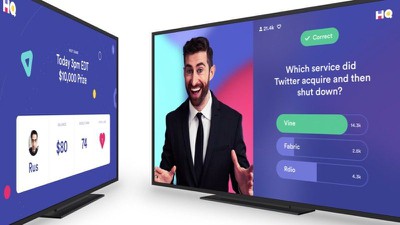 With HQ Trivia, each game has a prize pot that is distributed to all participating winners. Games take place twice daily and include an assortment of trivia questions. Participants have just seconds to answer when a question is asked, cutting down on the potential for cheating.

As TechCrunch points out, the new HQ Trivia Apple TV app comes as interest in the game is waning. Based on App Annie rankings, HQ Trivia on iOS has dropped from the #1 trivia game in the U.S. to the #10 game, and it's fallen from the #44 overall game to #196 over the course of the past few months.

Introducing an Apple TV app has the potential to increase the app's popularity once again, giving it a way to stand out from other trivia app clones that have popped up.

HQ Trivia can be downloaded from the App Store on the Apple TV starting today. It's also available from the iOS App Store. [Direct Link]

farewelwilliams
i stopped playing because i got sick of waiting two minutes before the show starts and another 2 minutes while the host rambles on. just remind me 30 seconds before the first question starts and i'm goooood
Score: 9 Votes (Like | Disagree)

Goldfrapp
Let's get down to the nitty-gritty
Score: 9 Votes (Like | Disagree)

Let's get down to the nitty-gritty

Let’s get this show on the road. Q-mero, numero Uno!

They really did score well with Scott. He’s a great host for this show.
Score: 5 Votes (Like | Disagree)

I’m not surprised. I like the game, the presenters, and its format, but the prize pot is getting stretched so much that it’s not worth the time investment. I don’t know how they can fix that either.

In the UK the normal prize is £1,000 a show. The most recent ones have been split by ~300 people and so the prize has been ~£3.33 per person! It’s cringey when the presenter is excited about it at the end and lists off a few names and their prize.

The money isn't that big of incentive in my opinion. I just like trivia and the bragging rights when I win (3x to date). However, they could make it one winner takes all more frequently if there are enough people out there like yourself who are only interested in the money aspect.
Score: 3 Votes (Like | Disagree)

dtrj787
There is no way the Apple TV remote is the best method here. Swipes and clicks are going to for sure, make you pick the wrong choice.
Score: 2 Votes (Like | Disagree)

KPandian1
The path to my next billion dollars!:cool:
Score: 2 Votes (Like | Disagree)
Read All Comments

Monday July 6, 2020 6:55 am PDT by Eric Slivka
Amid rumors and hints of a forthcoming update for the iMac, supplies of Apple's current 27-inch iMac continue to dwindle with mid- and high-end stock configurations now seeing shipping estimates pushed back into September. The 27-inch iMac has seen tight supplies and extended shipping estimates for months now, but the situation has been gradually worsening to the point where new buyers can...
Read Full Article • 62 comments