During the second quarter of 2018, Apple shipped an estimated 3.5 million Apple Watches worldwide, according to new data shared today by analytics firm Canalys.

At 3.5 million units shipped, Apple sold 30 percent more watches than it did a year ago during the second quarter of 2017, with the difference being the availability of the Apple Watch Series 3 with LTE connection, a feature that likely spurred many customers to upgrade or purchase one of the watches for the first time. 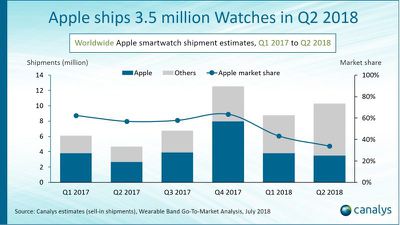 Apple's LTE Apple Watch was especially popular in Asia, accounting for 60 percent of the 250,000 units that were shipped to the region. The Apple Watch Series 3 with LTE was the best-shipping smartwatch in Asia in Q2 2018, according to Canalys.

Apple faces a growing threat from competitors, which have started to pass the million quarterly shipments mark," said Canalys Research Analyst Vincent Thielke. "Vendors are trying to differentiate their products with advanced heart-rate metrics, smart coaching and mapping, and consumers now have a much wider range of smartwatches to choose from than they did a year ago. Amid further competition from Samsung and Google, rumored to be launching Galaxy and Pixel watches respectively, Apple needs to work out how to drive refreshes in markets such as the US, where its penetration into the existing iPhone installed base has started to level off."

Canalys' Apple Watch shipment numbers are estimates, as Apple does not report the number of Apple Watches that it has sold and specific numbers are not available. Apple Watch sales are lumped into the company's "Other" category, which also includes AirPods, Apple TV, HomePod, Beats products, iPod touch, and other Apple-branded and third-party accessories.

Last quarter, Apple CEO Tim Cook said that the Apple Watch saw strong revenue growth "in the double digits," setting a March quarter revenue record. Apple plans to report its fiscal third quarter earnings results next week, which should give us a bit more insight into the performance of the Apple Watch from April to June.

As Canalys points out, with Apple facing competition from other vendors, updates to the Apple Watch are needed. Apple has not changed the design of the device since it was introduced in 2015, but this year, rumors suggest it will feature a larger display (1.57 inches and 1.78 inches) perhaps implemented through a reduction in bezel size, a higher-capacity battery, and enhanced heart rate detection features.

djcerla
AWs (and AirPods) are popping out everywhere here in Italy, in a way closely resembling what the iPod did in the 2000s.
Score: 19 Votes (Like | Disagree)

44267547
Aside from the numbers, It’s actually interesting, because in 2015 when the Apple Watch initially launched, I thought I was one only one of few that actually had one in public. I was on vacation two weeks ago and in the airport, at the resort, on the beach, I saw Apple Watches everywhere, including male and female wearing them. When you factor in the popularity of iPhone, obviously the Apple Watch is the most obvious choice, but it meshes so well with the iOS ecosystem and now with LTE, I don’t even need to have my phone on with me at all times either. It can only Improve from here with additional health sensors and battery life.
Score: 14 Votes (Like | Disagree)

apolloa
Whilst I’ve no doubt Apple has shipped a lot of these amazing little gadgets. One of the best devices they currently make. This report is still nothing more then an educated guess by an analyst firm.
So you take it with a pinch of salt really..
Kinda silly when they try to compare the figures to the competition.
Score: 7 Votes (Like | Disagree)

Aside from the numbers, It’s actually interesting, because in 2015 when the Apple Watch initially launched, I thought I was one only one of few that actually had one in public. I was on vacation two weeks ago and in the airport, at the resort, on the beach, I saw Apple Watches everywhere, including male and female wearing them.

Exactly my experience. In 2015, people would stop me and ask “Is that the iWatch??”

Today, I can’t go out in public without seeing them. Interestingly, they seem to be extremely popular among waitstaff.
Score: 6 Votes (Like | Disagree)

Aside from the numbers, It’s actually interesting, because in 2015 when the Apple Watch initially launched, I thought I was one only one of few that actually had one in public. I was on vacation two weeks ago and in the airport, at the resort, on the beach, I saw Apple Watches everywhere, including male and female wearing them. When you factor in the popularity of iPhone, obviously the Apple Watch is the most obvious choice, but it meshes so well with the iOS ecosystem and now with LTE, I don’t even need to have myself on with me at all times either. It can Improve from here with additional health sensors and battery life.

Indeed it was very difficult for me to not get the cellular enabled Series 3 when it launched finally in India a couple of months ago. I told myself, this was what I was waiting for from day 1. But no, at this point, I will take a little bit better battery life and perhaps slightly larger screen and get that model when it finally launches. It helps that the watch is not something I am now used to wearing, after losing my regular watch to an accident a decade ago.

Series 4 it is for me! (or whichever with larger screen, thinner bezels, better battery and of course LTE)
Score: 5 Votes (Like | Disagree)

Rogifan
The headline should be updated to include the word estimated or something as Apple doesn’t provide watch sales.
Score: 5 Votes (Like | Disagree)
Read All Comments

Sunday February 5, 2023 6:07 am PST by Joe Rossignol
Apple has discussed selling a new top-of-the-line iPhone alongside the Pro and Pro Max models in 2024 at the earliest, according to Bloomberg's Mark Gurman. Based on this timeframe, the device would be part of the iPhone 16 lineup or later. In a September 2022 edition of his weekly "Power On" newsletter, Gurman said there was "potential" for an iPhone 15 Ultra to replace the iPhone 15 Pro...
Read Full Article • 382 comments