Apple retail stores in the United States have received supplies of the new 2018 MacBook Pro models, which means stock configurations are available for in-store pickup and walk-in purchase as of today.

Both 13 and 15-inch models are available in many Apple retail stores around the country, but not all stores appear to have full stock at this time. 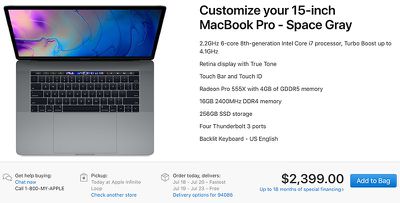 When the MacBook Pro was announced on Thursday, Apple said the new machines would be in retail stores later this week. The first orders placed on Thursday have also started arriving to customers, with Apple shipping some out as early as Friday.

In addition to the United States, the new 13-inch MacBook Pro is also available for in-store pickup in the UK, Germany, and France, but retail locations don't yet appear to be stocking the 15-inch model. In-store pickup is not yet available in Canada, Australia, or countries in Asia.

Beyond the two stock 13 and 15-inch models, there are several customization options available for an additional price, with the top of the line 13-inch model priced at $3,699 for a 2.7GHz Core i7 processor, 16GB RAM, and a 2TB SSD.

Custom configurations are not generally in stock at most Apple retail stores and will need to be custom ordered from Apple's website. Custom orders placed today will arrive in approximately 10 days.

fizzyfizz
I have absolutely no need for one of these new MacBook Pros yet still feel compelled to buy one. Annoying!
Score: 29 Votes (Like | Disagree)

Good specs. But I still don't feel like spending hundreds on adapters to be able to work on this thing...

Hundreds? Really? Of course everyones' needs are different, but I'm doing fine with two USB-C to USB-A 3.1 cables at $9 each. And a USB-C to RJ45 Gigabit Ethernet adapter for $15.
Score: 25 Votes (Like | Disagree)

You’ve got Ethernet (1Gb or 10Gb), FireWire, eSata, Thunderbolt, or any combination of ports YOU need. I don’t want an SD card slot but there is one facility where I need both 1Gbe and 10Gbe active; do you ever need that? The versatility of having 4 of anything, including things that may not be invented yet, really appeals to me. Add in a dock (which I have used since Thunderbolt was introduced in 2011) and I have even more ports.

This is, in my opinion, the single greatest advantage of the MacBook Pro since 2016.
Score: 20 Votes (Like | Disagree)

tekboi
Good specs. But I still don't feel like spending hundreds on adapters to be able to work on this thing...
Score: 14 Votes (Like | Disagree)
Read All Comments