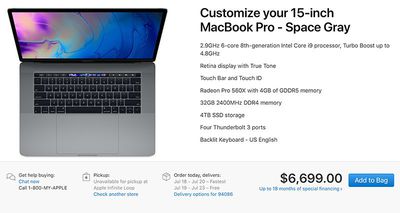 It's the new 4TB SSD upgrade that's the most expensive, with Apple also offering more affordable 1TB and 2TB upgrades, for $400 and $1,200, respectively. Last year's 2017 MacBook Pro models maxed out at 2TB of storage rather than 4TB, and didn't offer RAM upgrades.

If you skip out on the SSD upgrades in the new machines, you can get a 15-inch MacBook Pro with maximum RAM and the best processor for $3,499, or a 13-inch model for $2,499, which is just a few hundred dollars more expensive than similar upgrades cost last year rather than a few thousand.

Most users won't need 4TB of storage, but it's a good option to have for those professional users who do need the extra capacity.

krakman
You forgot to add the price for the dongles!!!!

For $6699 you can't download from an SD card, plug in a ethernet cable, connect to HDMI, connect any legacy hard drives, etc etc.

HarryKeogh
Man, the stuff I could do with that rig!

Is there even a laptop that powerful on Windows?

macpodman
Plus an additional $379 for AppleCare to get a 3 year warranty, which should come as standard IMHO.
Score: 35 Votes (Like | Disagree)

RudySnow
Seriously... what is Apple smoking? A $7K laptop?!?
Score: 35 Votes (Like | Disagree)
Read All Comments