Apple today seeded the third beta of an upcoming iOS 11.4.1 update to developers, one week after seeding the second beta and three weeks after releasing iOS 11.4, an update that introduced AirPlay 2 and Messages in iCloud.

Registered developers can download the new iOS 11.4.1 beta from Apple's Developer Center or over-the-air once the proper configuration profile has been installed from the Developer Center. 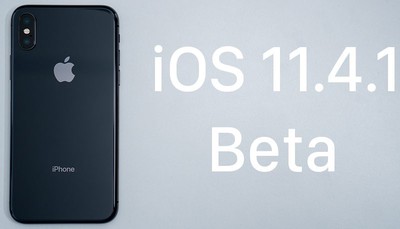 No new features were discovered in the first two iOS 11.4.1 betas, suggesting it focuses on bug fixes and performance improvements to address issues discovered since the release of iOS 11.4.

We'll update this post should we discover any new features in the third iOS 11.4.1 beta, but we're not expecting major changes now that Apple has shifted its focus to iOS 12, which is also available to developers for beta testing purposes.

Update: The third beta of iOS 11.4.1 is also available for public beta testers.

Who is actually running these betas? Anyone? Anyone?

Developers are probably more worried about iOS 12 right now, and so are any enthusiasts who are willing to run betas. I can't see anyone running this beta other than very special edge cases.

Most developers are still working with 11.4. While they need to prepare for iOS 12, that's still not something they HAVE to worry about until the Sept release. It's much more critical to fix problems for the other 99.9% of users on iOS 11 right now. You can't just let them deal with buggy software for the next 3 months.

Additionally, this is just the first beta of iOS 12 out. Most developers will wait a few before even bothering to start development work. A lot is missing from this first release. For instance, iOS 12 broke all apps running Webview. Until Apple resolves that, no development can really take place for the countless apps that use it. This is one of many reasons developers don't hop on the second the first beta drops.
Score: 10 Votes (Like | Disagree)

Obviously Apple has dedicated all resources onto iOS 11.4.1 so iOS 12 development has been postponed until iOS 11.4.1 is ready....

Obviously, you are doing nothing more than making logical fallacy guesses.
Score: 9 Votes (Like | Disagree)

Obviously Apple has dedicated all resources onto iOS 11.4.1 so iOS 12 development has been postponed until iOS 11.4.1 is ready....

justperry
People here assume iOS 12 is lots worse than iOS 11.4.X, guess what, it's probably the best first version of iOS ever.

I was on 11.4.1 beta before I installed this one (iOS 12 beta), it was getting there and probably will be stable before iOS 12 gets released.

As for developers, if I am not wrong they can both install the next iOS version and still develop for the older version so staying on the older one is not needed.
Score: 7 Votes (Like | Disagree)

bluecoast
Does this fix the 11.4 power drain issue does anyone know?
Score: 7 Votes (Like | Disagree)

Um well there are a LOT of folks who are not running 12 just yet since its still in early stages. Myself I have 12 on iPad Mini 4 but not gonna put it on iPhone just yet. But 11.4.1 is a safer bet for that. I am sure I am not alone in this thought process :)

no one with any sense would put the first beta apple release on any important device. I always think of the first beta after WDC as more Alpha than Beta
Score: 7 Votes (Like | Disagree)
Read All Comments

Wednesday June 23, 2021 5:07 am PDT by Sami Fathi
Apple earlier today published a detailed report outlining in blatant terms the negative impact that sideloading would have on the iPhone and iPad, specifically calling out the impacts it would have on user privacy and security. Now, the company is continuing its PR push, with an executive noting in an interview that users who wish to sideload apps already have that option thanks to other...
Read Full Article • 358 comments