Sonos is planning to implement AirPlay 2 support for its speakers starting this July, the company announced today at an event unveiling new technology.

Sonos has previously said that AirPlay 2 will be available on the Sonos One, the second-generation Play:5, the Playbase, and future products. 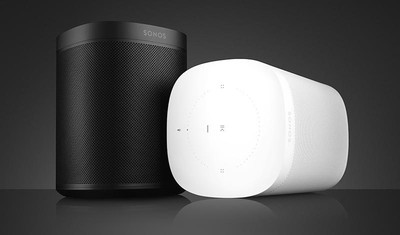 Older Sonos speakers will not support AirPlay 2 on their own due to processor limitations, but they can be paired with the Playbase, the Play:5, or the Sonos One to enable AirPlay 2 functionality. A Sonos Play:1 grouped with a Sonos One, for example, will support AirPlay 2.

AirPlay 2-enabled Sonos speakers will also work with other AirPlay 2 speakers such as the HomePod, and Apple Music will work on Sonos devices using Siri on a paired iPhone, according to Sonos.

Sonos today also announced that Amazon Alexa works with its devices starting now in multiple countries, and the company unveiled a new smart speaker for the living room -- the Sonos Beam. The Sonos Beam, priced at $399, is a smart, compact soundbar designed for the TV, and it too will support AirPlay 2 and Siri. The Sonos Beam and other AirPlay 2 Sonos speakers are the first that have dual-assistant support, working with both Alexa and Siri. Google Assistant support is also in the works.

Apple first enabled AirPlay 2 in the iOS 11.4 update, released in late May, and following the release, Apple published a list of all of the speakers that have announced plans to implement support for AirPlay 2. AirPlay 2 will be enabled on Sonos speakers through a software update.

Pre-orders for the Sonos Beam are available starting today from the Sonos website, with Sonos planning to launch the speaker in July.

vixster1901
If they can connect a current model with the old to allow airplay2 , why not provide a bridge replacement to allow old speakers to work?
Score: 10 Votes (Like | Disagree)

macmyworld
Apple should have bought Sonos and never made the HomePod. Granted that would require Apple to open the ecosystem. Airplay2 for Sonia does nothing for me. Tried the HomePod, went back to Sonos. All is good.
Score: 3 Votes (Like | Disagree)

Seems to good to be true :) Being able to use Airplay 2 in place of a Connect just seems crazy considering how Sonos typically operates but I'll take it if this is in fact true. I just wonder how this will work because the Apple TV is not going to show up in the Sonos app to create a group.

I don't think you'll be creating a group within the Sonos App. Airplay 2 allows the Sonos speakers to be used outside of the Sonos app itself, which is kind of the whole point. :)
Score: 2 Votes (Like | Disagree)
Read All Comments

Thursday May 13, 2021 12:10 am PDT by Sami Fathi
Apple has fired Antonio García Martínez, an ex-Facebook product manager and author of the controversial book "Chaos Monkeys," following public and internal calls for removal and investigation due to past misogynistic statements, The Verge reports. Apple hired Martínez earlier this week to join its ads team, however, comments that Martínez made in the past sparked condemnation from users...
Read Full Article • 277 comments

Wednesday May 12, 2021 10:03 am PDT by Juli Clover
Apple's M1 iMacs are set to start delivering to customers next week, and ahead of the official launch day, benchmarks for the machines have been showing up on Geekbench, likely from reviewers who are testing them. It will come as no surprise that M1 iMac benchmarks are right on par with benchmarks for the M1 MacBook Pro, MacBook Air, and Mac mini, coming in with an average single-core score...
Read Full Article • 253 comments

Wednesday May 12, 2021 3:54 pm PDT by Juli Clover
In the ongoing legal battle between Apple and Epic Games, the two companies are this week calling up their expert witnesses to argue their points before Judge Yvonne Gonzalez Rogers, who will make a decision in the case after a three week trial. Expert testimony is not as exciting as some of the leaked App Store documents that were highlighted last week, especially as much of what's being...
Read Full Article • 240 comments

Wednesday May 12, 2021 8:44 am PDT by Sami Fathi
An Apple customer in the United Kingdom has successfully used Apple's Find My network to track an AirTag as it was being sent by mail to a friend in a completely different city. Outlined in a blog post at Intego, Kirk McElhearn said he taped an AirTag to a piece of card, wrapped it inside a small bubble envelope, and then sent it on its way. Kirk lives in the small town of...
Read Full Article • 149 comments