Following today's WWDC keynote event that saw the introduction of iOS 12, macOS 10.14, and watchOS 5, and tvOS 12, Apple has seeded the first beta of the new tvOS 12 operating system to developers for testing purposes.

Designed for the fourth and fifth-generation Apple TV, the new tvOS 12 developer beta can be downloaded onto the Apple TV via a profile that's installed using Xcode. 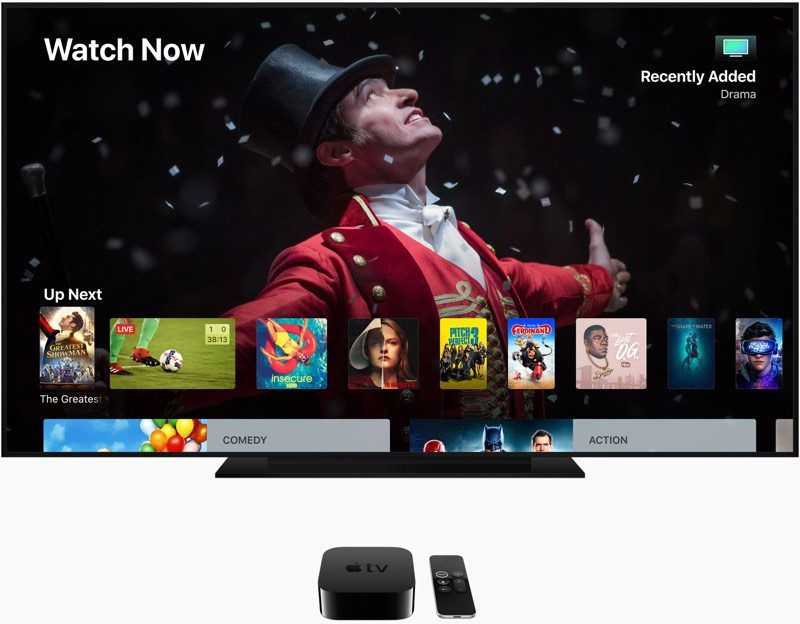 tvOS 12 brings support for Dolby Atmos, a feature that Apple TV users have been wanting since the Apple TV 4K first launched. Starting this fall, iTunes will be home to the largest collection of Dolby Atmos-supported movies, and all purchased iTunes movies will be upgraded for free.

There are new aerial screensavers on Apple TV that were captured from the International Space Station.

Starting later this year, Apple is introducing a new Zero Sign-On feature for Charter Spectrum users that will let them watch live channels and on-demand programs when connected to their Charter Spectrum broadband with no need to sign in.

Charter Spectrum users are also going to be able to place their traditional cable boxes with the Apple TV through an upcoming Spectrum TV app. These features will come to other providers in the future.

Other tvOS 12 features include autofill passwords from the iPhone to sign into Apple TV apps more quickly, and support for Home Control systems like Crestron and Savant, which will be able to be used to control the Apple TV. Apple also plans to make the Apple TV Remote a default option in Control Center on iOS devices.

The tvOS 12 update is limited to developers right now, but Apple will provide a public beta of the software to public beta testers later this summer. tvOS 12 will see a fall launch alongside iOS 12, macOS 10.14, and watchOS 5.

ErikGrim
No Netflix support in tv app yet?
Rating: 1 Votes

Anyone have confirmation if Dolby Atmos is coming to the 4th gen Apple TV, or is just for the 4K? Thanks.

I am assuming the answer is yes. Both the ATV 4th gen. and 4K have the exact same audio capabilities. I think Apple is just pushing the 4K ATV, so they only mentioned it. (I.E. tvOS 11 added FLAC audio capability to the 4th gen. ATV). ...Atmos is just an extension of DD+. The only reason it's not already in ATV 4 & 4K is because it cannot be implemented through LPCM, which is how Apple mixes content audio & system audio. So, Apple will either mix the audio via DD+ instead or give a bit streaming option.

I'm only answering because I'm not sure any ATV devs are on this forum. May have to wait until public beta is available.
[doublepost=1528152371][/doublepost]

Hi, I tried updating through the system update on my ATV4K, I'm a beta tester, nothing there yet. Anyone seeing this also?
Thanks, Jerry

Are you a dev? It's only available to developers at this point, may be a while before we see a public beta.
Rating: 1 Votes

chucker23n1
Has someone checked if this ships with the newer Aerial screen savers, or if they're not live yet? The old URL doesn't appear to supply them.
Rating: 1 Votes

Sorry, I'm a public beta tester...Thanks for straightening me out.

don't be sorry, it's just that the very first beta of Apple's OS's, Apple typically only gives out the roughest version to devs, then, with the first update, usually it goes to devs., then public next day.
Rating: 1 Votes
[ Read All Comments ]