Following two months of beta testing, AgileBits has announced that 1Password 7 for Mac will be released for all users at some point on Tuesday. 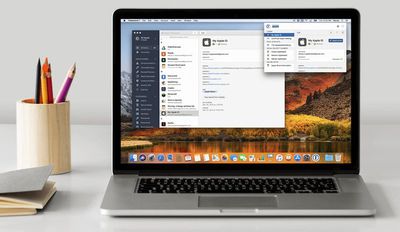 The latest version of the popular password manager is a major update with dozens of new features and improvements, including a new dark-themed, collapsible sidebar that makes it easier to use and manage password vaults.

Users can now access their vaults by clicking on "All Vaults" in the sidebar, with full drag-and-drop support to conveniently move or copy items from one vault to another, including between different accounts. Users can also drag items onto the "New Vault" menu item and one will be created automatically.

1Password 7 for Mac integrates with Have I Been Pwned? to securely check a user's passwords against a database of passwords that have been compromised in known data breaches, such as when a popular service or website is hacked.

The app's security-focused Watchtower feature can also identify any login items that support two-factor authentication and help users enable it on those websites. Watchtower can now also keep track of expiring items so users know in advance if they need to renew their credit cards, passports, licenses, and more.

1Password now helps users sign in to their favorite apps by showing them suggested logins for the app they are currently using. If a user is signing into the App Store, for example, they can click the 1Password icon in the menu bar to see their Apple ID and simply drag and drop their username and password to log in.

The app's redesign extends to the lock screen, login icons, tags, pop-out windows for items, and more, while there is a new custom font Courier Prime Bits, by Alan Dague-Greene, that makes it easier to view passwords.

1Password 7 for Mac is the first paid upgrade to the desktop version of the app in five years, meaning that users of previous versions will need to purchase a new license, or have a subscription, to use the new version.

Users with an active 1Password subscription, which start at $2.99 per month for individuals, can simply install 1Password 7 from the Mac App Store or AgileBits website and be ready to go. Otherwise, after installing the latest version, there is a prompt to sign up for a 1Password membership.

For those who wish to purchase a license for 1Password 7 for Mac, instead of a subscription, the app must be downloaded directly from the AgileBits website. Licenses are $49.99 for a limited time, and $64.99 after that, and are per-person, per-platform. macOS Sierra or later is required.

jasonefmonk
I’m surprised and disappointed by some of the responses here. 1Password is the most realiable and important piece of software I use. I use it daily, it makes me quicker and more secure all the time. What subscription provides you more value? I’d cancel one of your streaming video services before dumping AgileBits. If you must buy an individual license just buy it direct from them.

I hadn’t subscribed yet because I had current licences for everything I needed, but with this update I’ll be moving to subscription and getting family on board too.
Score: 15 Votes (Like | Disagree)

roguedaemon
Fantastic! Price is a bit high tho :/
But, miss me with that subscription junk, would much rather pay once and own it.
Score: 15 Votes (Like | Disagree)

QCassidy352
Seems like a cool upgrade but for that price, I’ll stick with version 6.
Score: 13 Votes (Like | Disagree)

Fantastic! Price is a bit high tho :/
But, miss me with that subscription junk, would much rather pay once and own it.

I don't have any reservations continuing to support their development.
Score: 11 Votes (Like | Disagree)

repomonkey
Been using this product for many many years, but this is one subscription based product too many, I'm done with them. I want to own the software outright and if I can't then I will look elsewhere. It's a shame, but I won't be updating - particularly since there are some excellent alternatives such as Dashlane. So long and thanks for all the fish.
Score: 11 Votes (Like | Disagree)

KennethS
I, too, initially rejected the subscription model having been a happy owner of the stand-alone license. I then decided to introduce my two sons and wife to 1Password and encourage them to adopt better password security practices. I relented and paid for the family subscription plan and have not looked back. From MY personal perspective, it is well worth the cost. My wife and I use Mac computers, our sons prefer Windows PCs. We are all using iPhones, but one of my sons does tend to sway between Apple and Android phones when we allow him a phone upgrade. The fact that the family license allows all devices, regardless of platform, to participate makes things far simpler for us. And being able to setup vaults for various combinations of the family members allows us to securely share passwords and secure notes as we need to and regardless of the operating system being used. To further be able to log into our 1Password accounts from any internet connected device is just another useful convenience.

I have no affiliation with Agile Bits but am a longtime very satisfied customer, and for me and my family the subscription plan is money well spent.
Score: 10 Votes (Like | Disagree)
Read All Comments